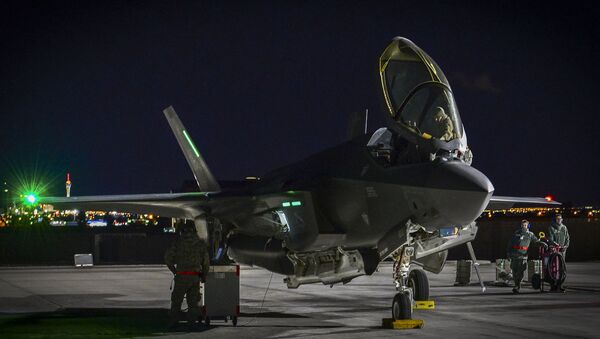 © Photo : Public Domain / Robert Sullivan
Subscribe
Oslo's decision to update its air fleet with F-35 fighter aircraft has been billed the single largest defence procurement in Norwegian history, but has run into one problem after another.

Norwegian Defence Minister Frank Bakke-Jensen's admission that the bill for the 52 F-35s might be shared with branches outside the defence budget has triggered fears that it may compromise welfare and pensions, the Norwegian daily Klassekampen reported.

As was previously reported by the newspaper Bergens Tidende, the total cost of Norway's new F-35 fleet could exceed initial calculations by as much as NOK 16 billion ($1.8 billion). This sum includes associated costs, including weapons and the construction of air bases at Ørland and Evenes.

When the Norwegian parliament voted in favour of the aircraft, NOK 11 billion ($1.25 billion) was set aside in a so-called "uncertainty provision" in addition to the stated objective. As long as the extra expenses do not exceed NOK 11 billion, the parliament is not required to re-examine the combat aircraft case.

However, the parliament did not specify how the potential extra expenses shall be covered. While the tacit understanding is that these costs shall be covered by the armed forces themselves, Frank Bakke-Jensen admitted that money may be taken from other parts of the budget. Despite challenging Bergens Tidende's calculation, Bakke-Jensen ventured that any additional costs could cause fresh funds to be pumped into the defence budget.

"If there is a need to utilise the uncertainty provision, the government will consider this need for funding against other projects and other focus areas", Bakke-Jensen said, as quoted by Klassekampen.

This admission has triggered fears that other parts of society will ultimately have to fork out for the F-35s.

"What the government is now opening up to is covering the bill through additional funding. So the bill will be shouldered by other parts of society. It can mean sending it to welfare, pensioners or the poor", Socialist Left Party leader Audun Lysbakken warned.

"They try to give this impression that it has never been intended to cover the bill, if increased, by the defence budget alone", he added. "The question is why they have been assuring us that the spending goal is within reach".

Despite having drastically reduced the number of bases, Norway's air force has made massive investments in procuring new aircraft. With 52 F-35s, Norway is set to become one of Europe's foremost users of the US-made fighter jet, despite the project's well-documented flaws and skyrocketing costs.

So far, Norway has received nine F-35 fighter aircraft, with an average price tag of NOK 1.375 billion apiece (roughly $160 million), with another seven still running tests in the US.