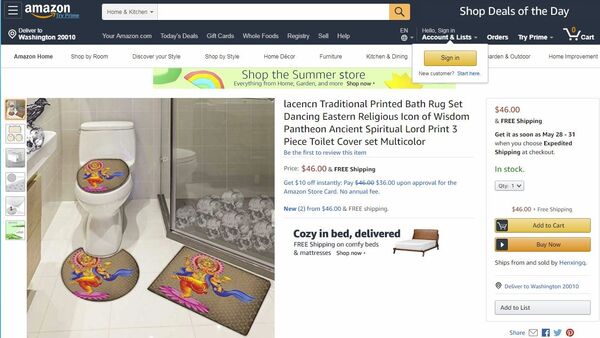 Subscribe
#BoycottAmazon was trending on Indian Twitter Thursday after customers in the subcontinent noticed the retail giant was selling items like shoes, rugs and toilet covers emblazoned with Hindu deities, the Indian flag or icon Mahatma Gandhi.

Reuters reports that Amazon will be pulling the offending products. "All sellers must follow our selling guidelines and those who do not will be subject to action including potential removal of their account," the company said in a statement.

Some asked whether Christians or Muslims would appreciate seeing their prophets or gods on such items.

Another tweeted what appear to be bathroom sets decorated with crosses and Arabic script.

The company was accused of "playing with the emotions of Hindus."

Feet are considered unclean in India, and etiquette guides caution travelers to avoid pointing their feet at anyone. Shoes are also traditionally removed when entering homes or religious buildings, and therefor to trample with feet or shoes on the image of a god or a revered figure would be deeply offensive.

Indian news outlet ApbLive notes that the items were not for sale within India, but reports that the "boycott Amazon" hashtag was tweeted more than 12,000 times. Outraged Indians highlighted in the article urged the subcontinent's Amazon shoppers to try to order such items and then cancel them after they'd arrived, to uninstall Amazon's mobile applications and to poorly rate the company's services.

This isn't the first time Amazon has caused national uproar — in fact, it's happened every year since 2016. In 2017, for example, Indians were incensed to discover doormats printed with their flag being sold by Amazon Canada, and India's foreign minister went so far as to threaten to revoke the visas of Amazon employees in India if the items weren't pulled, according to multiple reports. Outcry erupted in 2018 over the same issue.

But Amazon isn't alone. Ikea, another retail powerhouse, was recently thrashed online — by no less than the prime minister of New Zealand — for selling maps that left out the land way, way down under.