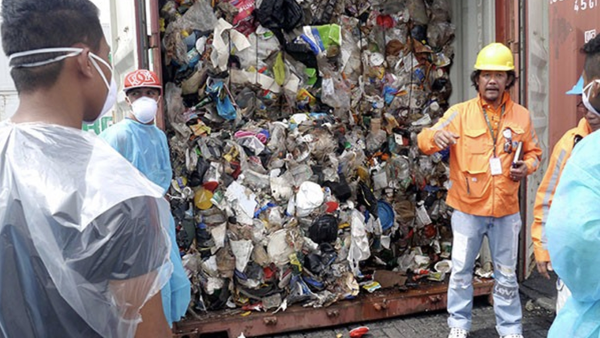 © Photo : Ban Toxics
Subscribe
Manila has repeatedly demanded that Canada should take back tonnes of their trash sent to the Asian country in 2013-2014. The eccentric president of the Philippines, Rodrigo Duterte, earlier threatened Ottawa that they would declare war on Canada if it did not take its garbage.

The trash row between Canada and the Philippines has resulted in the recall of Manila’s ambassador and consuls from the North American state. The Philippine top diplomat, Foreign Affairs Secretary Teodoro Locsin Jr., has announced the decision on Twitter, accusing Canada of missing the deadline for resolving the issue. He threatened that Manila’s diminished diplomatic presence would continue until Ottawa is ready to take back tonnes of garbage that were mistakenly, as some reports suggest, sent to the Asian country years ago.

At midnight last night, letters for the recall of our ambassador and consuls to Canada went out. They are expected here in a day or so. Canada missed the May 15 deadline. And we shall maintain a diminished diplomatic presence in Canada until its garbage is ship bound there.

​According to the top diplomat, the government may consider a 2 to 3-week delay but this should not be seen a deadline extension. He insisted that Canada had triggered the radical move after its representative did not show up for a meeting with Customs.

That the government may consider a 2 to 3 week delay DOES NOT EXTEND THE DEADLINE. Our diplomatic presence in Canada shall be de minimis. At the Japanese enthronement ceremony, DOF informed me that Canada did not show up at a meeting with Customs and that was the trigger.

​He also accused fellow officials, “hungry to emigrate to Canada” of inaction and attempting to maintain friendly relations at the expense of “defying” the country’s President Rodrigo Duterte and letting Canadian trash remain in the Philippines. The hardline head of state earlier threatened to put Canada on his war list if it fails to take back the garbage.

"I'll give a warning to Canada maybe next week that they better pull that (trash) out. We'll declare war against them, we can handle them anyway”, he said, as cited by CNN Philippines.

According to the broadcaster, 103 containers with 2,450 tonnes of garbage arrived in the Philippines in 2013 and 2014. Although they were labelled as plastics for recycling, the local authorities discovered the shipment was filled with recyclable diapers, newspapers, and water bottles. They declared it illegal as the Canadian company that imported the cargo did not have clearance for such items.

A third of the containers have already been buried in the Philippines, while most of them, 69 in fact, still remain, the finance ministry said.

After Duterte’s remarks, Canada agreed to ship the trash away while Manila insisted that Ottawa would pay for the disposal. The Philippine Bureau of Customs stated last week that it was ready to send the trash away but Canada needed several more weeks.

“We have made an offer to repatriate this Canadian waste and continue to be closely engaged with the Philippines to resolve the outstanding details to ensure the shipment’s return to Canada as quickly as possible”, he said in a statement to The New York Times.