US-China May trade negotiations have resulted in a new wave of tariff sprees from Washington. For its part, China has made it clear that while it remains open to talks, it will not succumb to the US pressure. Chinese academics and businessmen have weighed up Washington and Beijing's chances of winning the trade war.

Following 9-10 May trade talks with China US President Donald Trump moved to step up the tariffs on another $200 billion in Chinese imports from 10 to 25 percent thus disrupting a trade truce he agreed upon with his Chinese counterpart Xi Jinping on 2 December 2018. China reacted in a tit-for-tat manner, introducing new tariffs on $60 billion in American goods three days later.

While the US Treasury is signalling that the negotiations between the world's two biggest economies are likely to continue, the US Department of Commerce has placed Chinese telecom giant Huawei along with 70 affiliates on a trade blacklist. The Trump administration embraced the tariff spree in March 2018, citing a growing trade deficit between China and the US.

Dmitry Kiselyov, the general director of Rossiya Segodnya International Information Agency, discussed the recent escalation in the Sino-American trade war with Kong Dan, the former chairman of CITIC Group; Zhang Weiwei, a Chinese professor of international relations at Fudan University and a senior research fellow at the Chunqiu Institute; and Li Shimo, an investor and billionaire, founder and managing director of Chengwei Capital, owner of many US Silicon Valley companies.

US Tariffs Have Nothing to Do With Competition, These are Steps to Contain China

Dmitry Kiselyov: What resources does China have?

Kong Dan: Without a trade war, our view of the United States would be superficial; now we know the other side as well. I, as a representative of business circles, do not really understand the subtleties of what the Americans want. Do they just think that Chinese development is unacceptable for them?

Or do they want to cut off all opportunities for China's future development? In my opinion, the relevant measures that the Americans have been initiating since the very beginning of the trade war to the present day are most likely real steps to contain China rather than some form of sanctions. This is a desire to hinder China's development in various spheres, specifically in trade, economic development, industrial development, science and technology, in the financial sphere and even in the area of human resources in China. They want to hamper our development on all sides.

Dmitry Kiselyov: But is it hostile?

Kong Dan: I would call this approach competition. But competition can be different: hostile, non-hostile…

China's Two Main Advantages in Trade War With US

Kong Dan: You might know that we used to have the popular concept of the so-called "hybrid war" but I would not describe the behaviour of Americans using this term. They just want to cut off all of China's development opportunities. They want to limit our ability to thrive as much as possible.

China May Regulate Energy Imports from US Amid Trade Row
Competition has various forms or different aspects. I also have a counter-question for you, how do Russians assess the nature of those sanctions measures that the Americans have implemented against Russia?

The United States considers us its adversaries. They previously included Russia, China, Iran, and North Korea on their blacklist, a list of terrorist forces. And China is first on the list. Are we hostile to them?

Today I heard you talking about Russia, about the principles of preserving your development and sovereignty, I agree with that. The geopolitical situation is different for everyone, the history is different. There may be differences in how countries approach dealing with issues.

I previously worked as the head of the largest state-owned company in China, so, of course, I understand what kind of mission one carries on his/her shoulders. I am willing to make efforts to stimulate the development of the Russian-Chinese partnership as a whole; I think there is still a lot to do in this direction. The US underestimates the potential of President Putin and Russia, China and President Xi Jinping. They will pay a heavy price for it.

I would like to name two advantages of the trade war for us.

Dmitry Kiselyov: You said you have confidence that China will emerge victorious in this trade war, what does this victory mean? When will it come?

Kong Dan: Trump has said many times that he can hit our stock market to destroy it. As for us, we are doing everything well, we are successfully organising work, and we are looking for ways for rapid development in recent years. Our goal of a 100-year-old rebirth of the nation can be achieved — and that is our victory… Of course, we understand that the United States wants to impede our development. If they want to destroy us then I think they will fail. Only in their dreams!

Zhang Weiwei: I support Mr Kong's view that the Chinese consumer market is the largest in the world! Especially, in the field of innovation. And if one leads the battle with such colossal markets, then the initiators will surely fail.

READ MORE: US Treasury Chief to Plan for Trade Meeting in China Soon

'If US Continues to Maintain Hegemony, It Will Suffer Heavy Losses'

Dmitry Kiselyov: What will then become of the defeated United States?

Li Shimo: I would like to note that in the course of a trade war, each of the parties has its own strengths and weaknesses. Our advantage is that we have a strong political system. The second one is social cohesion. The third one, as has already been stated, China has quite large domestic markets. The fourth one, China is the world's largest trading country and also the largest trading nation in the history of mankind.

China to Emerge Victorious From Trade War With US – Foreign Ministry
Unlike ours, the American political system has fallen into disarray. American society is split; the "social contract" has failed. The political and economic elite have gradually lost their credibility and reputation.

The advantage of the United States is its hegemony in the global financial system. The second advantage is the strong alliance system that was formed after the Second World War and the Cold War. And another one is a still high level of weapons development in the world.

However, the United States and China have different development goals. China is simply looking for suitable paths to future accelerated development. But the US has a dilemma. Previously, there was a different situation, there was hegemony — a very important driving force, a very important pillar, the so-called "soft power", and particularly they had ideological dominance. Over the past decades, Americans have repeatedly initiated hostilities, and acute social inequality has flared up inside the country. Today, hegemony in the ideological system is being lost; and some countries and regions' confidence in the USA is being lost.

World
Boeing Calls For Limits to US Tariffs Over EU Subsidies
Therefore, if they now wish to continue to maintain hegemony, they will suffer heavy losses. But if they back down from it — for instance, Trump wants to abandon ideological dominance — it will turn into a power struggle in its purest form. This will lead to a loss of ideological advantage in the international arena.

How to assess the outcome of the battle? I would suggest that you read the 19th National Congress of the Communist Party of China report delivered by President Xi Jinping. In it, he outlined two challenges: the first one — 2035, the second one — 2049. These two goals are quite clear and realistic… If we can complete these tasks, then the victory will be ours. 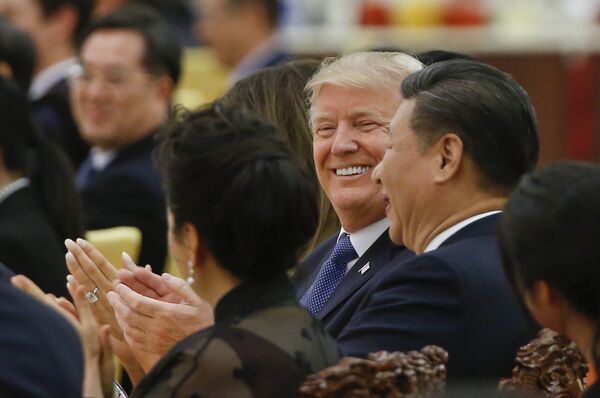 Dmitry Kiselyov: What are these challenges?

Kong Dan: China has two development goals for the current century. The first is that by 2021 when the CPC will celebrate its 100th anniversary, it will fully and comprehensively build a moderately prosperous society in China. Another goal by 2049, when it will be 100 years since the founding of the PRC, China should reach the level of the most advanced developed countries. Moreover, there is another intermediate task between these two goals of the current century — by 2035 China has to move into the category of moderately developed countries.

Zhang Weiwei: China borrowed its methodology and planning practices from the USSR. However, over the past decades, we have brought a lot of innovation into this process. Now it is no longer the old decision-making but strategic and guiding planning. The Americans could see that over the past 40 years China has been fulfilling all its five-year plans ahead of schedule, and that frightened them. If we are talking about how the China-US trade war will end, then personally I would like to quote Americans who say: "if you can't beat them, join them".

READ MORE: China May Regulate Energy Imports from US Amid Trade Row

Dmitry Kiselyov: How many fingers are needed to describe the Chinese model, and what in fact is that, if we are talking about the alternative?

Zhang Weiwei: The Chinese Model of Development has several features. First, the leading ideology must be based on real facts. "Practice is the sole criterion of truth". As a result, we found that a developing country, such as China, needs to carry out modernisation. Looking at the rest of the world, it becomes clear that the Western model is not successful. The Soviet model also did not prevail. Therefore, Deng Xiaoping said that we need to follow our own path. We did not fall into the trap of "colour revolutions", we were looking for the path we needed based on reality. That is the key thing.

No US LNG Exports to China in Recent Months as Trade War Reaches Peak - Reports
I would like to add a little bit. If we talk about reforms in socialist countries, we can name two basic models. The first is the Gorbachev model, which is characterised by a radical nature. This is political and economic shock therapy. The cost of such reforms was very high and they were not quite successful. The Cuban Castro model implies supportive conservative therapy. They did not build a market economy; they were not included in the processes of globalisation but resorted only to spot adjustment and correction. Reforms according to the Chinese model are characterised by balance, prudence, and sustainability. We have carried out bold economic reforms, built a market economy, and joined the process of globalisation. However, we treat political reforms with caution and prudence; everything should serve economic reforms, and, ultimately, improve people's living standards.

The American model provides for the concept of political equality "One person, one vote", a multiparty system for governing a country. Strictly speaking, it only started working in 1965. The Chinese model began to take shape in 1978. Their starting points are more than ten years apart. Of course, they can compete with each other but I consider the Chinese model to be more successful and attractive; and I have already been talking about this for 20 years.