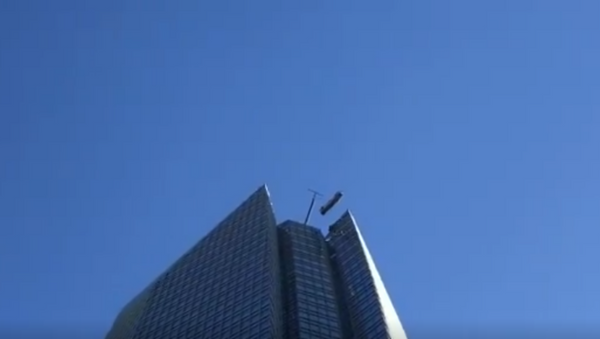 © Twitter/Courtesy of Oklahoma City Fire ‏
Subscribe
International
India
Africa
On Wednesday, emergency crews rescued two window washers who became trapped on a lift during a windstorm while working on the 850-foot-high Devon Tower, the tallest building in Oklahoma.

The two contractors were washing the building's windows when they became trapped on the lift, according to officials. Video footage shared on Twitter shows the lift being whipped back and forth uncontrollably, hitting the building and breaking windows, causing glass to fall onto Sheridan Avenue below.

​When firefighter crews arrived at the scene, they were able to safely rescue the people in the lift by lowering ropes from the roof of the building. They were evaluated by paramedics at the scene but declined medical treatment.

"They were on a ride that no one would want to experience, to say the least," Battalion Chief Benny Fulkerson with the Oklahoma City Fire Department told KOCO News 5.

​According to Fulkerson, it is unclear how the lift became stuck, but an investigation is currently underway.

"We got the call at 7:43 [a.m.] and by the time we got here, got all the way to the top of this very tall building and worked to get the basket stopped swinging and then reeled it in a little bit further and had them out of the basket, it was 8:30 [a.m.] when we actually had them removed," he explained.

​The corporate offices of the Oklahoma City-based energy company Devon Energy Corp are located in the Devon Tower.

​Following the incident, the CEO of Devon Energy, Dave Hager, confirmed that the two people involved in the incident were not Devon employees but rather contractors.

"We're thankful for the safety of everyone involved in this incident and rescue, and we're particularly appreciative of the response by the Oklahoma City Police and Fire Departments," Hager said.

"We're also pleased with the quick actions of our Corporate Security and Incident Management teams."