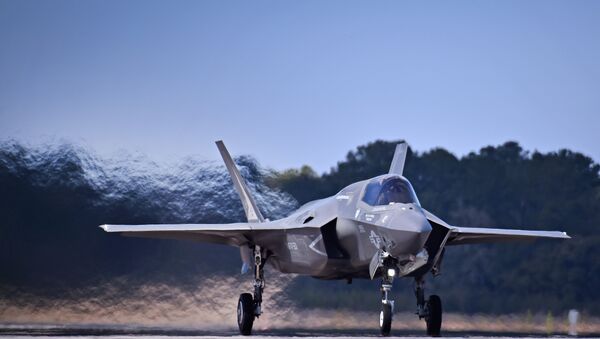 © AFP 2023 / JEFF J MITCHELL / GETTY IMAGES NORTH AMERICA
Subscribe
International
India
Africa
WASHINGTON (Sputnik) - A newly introduced piece of legislation in the US House of Representatives urges the Turkish government to abandon its plans to purchase the Russian S-400 air and missile defence system or lose the F-35, a bipartisan group of US lawmakers said in a joint news release.

"The message to Turkey is clear: there is broad, bipartisan consensus that if Turkey goes forward and acquires S-400s, it should not get F-35s", Republican House Minority Leader Kevin McCarthy said in the release. "There are simply too many grave consequences to the national security interests of the United States. Turkey should cancel its acquisition and instead cooperate with the United States on the many areas where it is in our mutual interest to work together".

US Defence Spending Bill Bans Transfer of F-35s to Turkey Due to Russian S-400s
The release comes after Ismail Demir, the Turkish undersecretary for defence industries, said earlier that Turkey is continuing to build installation and maintenance facilities to service F-35 fighter jets, being jointly developed with the United States, despite US threats to cut Ankara off for plans to buy Russian defence systems.

On 13 May, the US Defence Department announced that it was seeking new parts suppliers for the F-35 Lightening II fighter jet to replace those coming from Turkey in the case that Ankara went ahead with its plans to purchase Russia's S-400 air defence system.

US Again Attempting to Stop Delivery of Russian S-400s to Turkey – Report
Tensions between the United States and Turkey have recently been high over Ankara's possible purchase of Russia's defence systems. The United States claims that the S-400 system is incompatible with the US and European systems, but Turkey maintains that the potential purchase is meant to ensure its security and is not directed at the United States or NATO.

In 2014, the US Defence Department first announced its intentions to build a F-35 maintenance and repair center in Turkey under the Joint Strike Fighter plan. The program includes the design, development, production and logistical support for F-35 fighter jets on a global scale.