‘We Need to Stop It’: US Support For Duterte Must End to Halt Regime’s Brutality 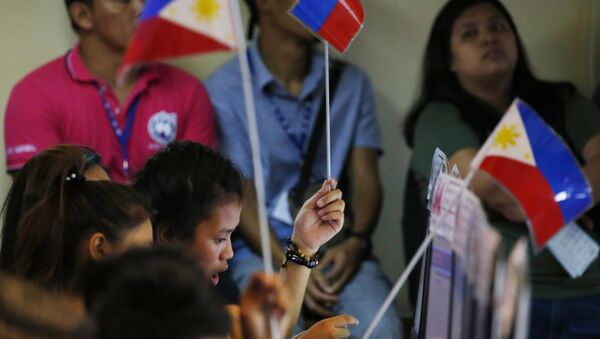 Adrian Bonifacio, chair of Anakbayan-USA, a national, democratic, mass organization of Filipino youth and students in the US, joined Radio Sputnik’s By Any Means Necessary Tuesday to discuss the preliminary results in the Philippines’ midterm elections, which suggest that Philippines President Rodrigo Duterte will continue to consolidate his power.

"To understand the midterm elections that just happened in the Philippines, we really need to understand the context of them. For the past three years under Duterte's administration, there has been increasing poverty, a worsening economic situation, a continuing erosion of democratic institutions, and so there have been a lot of people resisting, [more than 200] worker strikes in the Philippines, united mass movements against Duterte," Bonifacio told hosts Eugene Puryear and Sean Blackmon.

​"And faced with all these pressures, this election was really an opportunity for Duterte to try to re-legitimize and renew his mandate for his regime, because in actuality, it's unstable, it's shaky. He's desperate to cling to power, and so that is why, in this election, he resorted to a lot of intimidation," Bonifacio explained.

Early, unofficial results reveal that nine of the 12 open seats in the government's upper house will go to Duterte's allies, including his eldest son, former police chief Ronald "Bato" dela Rosa, who facilitated the drug war in the country, and Imee Marcos, the daughter of Ferdinand Marcos, whose presidential reign from 1965 to 1986 was defined by corruption. As a result, Duterte's PDP-Laban party is expected to continue having a "supermajority" in the government.

Since Duterte won the 2016 presidential election, he has carried out a brutal "war on drugs" that has resulted in the death of thousands of Filipinos and raised accusations of extrajudicial executions by police.

According to Human Rights Watch, the drug war has resulted in more than 12,000 deaths, of which at least 2,555 were killings committed by the Philippine National Police. The organization also says its research shows Philippine police are fabricating evidence to justify unlawful murders.

There were reports of vote-buying, defective counting machines and violence during Tuesday's elections, Bonifacio noted.

"The election in the Philippines was an example of massive fraud, incompetency and illegal activity on the part of the government. Even before the elections on May 13, there was physical harassment of people running in opposition. There was a massive spending of government funds to support candidates from Duterte's cabinet. During election day, there was vote buying. Duterte has even said himself that the practice of vote buying has been an integral part of the election in the Philippines. There was massive malfunctioning of the electronic voting machines, even worse than during Duterte's election in 2016. And that's not even to mention the extreme militarization of the voting places with the police, the same people responsible for Duterte's deadly drug war," Bonifacio explained.

According to the Human Rights Watch, the killing of journalists and attacks on schools by government officials are common in the Philippines. Leftist activists are also targeted by the military for allegedly being communist New People's Army rebels.

"In the past two years, there has been an intensification of neoliberal policies, worsening economic situation for the most marginalized in the Philippines. His [Duterte's] war on drugs, which is basically a war on the poor, has almost cost 30,000 lives, while at the same time — big drug lords, none of them have been jailed," Bonifacio explained.

In addition, under Duterte's rule, the Philippine Congress extended martial law administered by military forces in the southern island of Mindanao in 2017 to cover up the drug war, as well as to suppress peasant movements for land and worker strikes for just wages, Bonifacio explained.

At the end of 2017, the Philippine Congress also passed tax reforms which decreased personal income taxes but increased levies on consumer goods.

"A recent set of very repressive tax measures has increased the prices of basic commodities exorbitantly. People can't even afford basic goods anymore, and then this is also not to mention the continued presence of the US military and then the encroachment of Chinese military as well in the west Philippines. So, the Philippine people have been really suffering under Duterte for the past two years," Bonifacio told Sputnik.

Although the US government has condemned the drug war in the Philippines, the "numbers and the facts" tell a different story, Bonifacio noted.

"The US Congress has made different statements against Duterte's presidency. But at this point, we are looking at the numbers and the facts, and we are saying that the US government should put its money where its mouth is. In 2018 alone, there was almost $200 million sent to the Philippines' military and police. So, the same people who are carrying out the drug war and the same people who are bombing indigenous communities are getting funds from the US government. So that's one of the biggest fights that the people in the US can do, is to build solidarity for people in the Philippines by fighting against any kind of US support, whether that comes in military aid, police aid or even just political support," Bonifacio said. "We know that [US President Donald] Trump is a fan of Duterte. They are very buddy-buddy, and we need to see it stop."