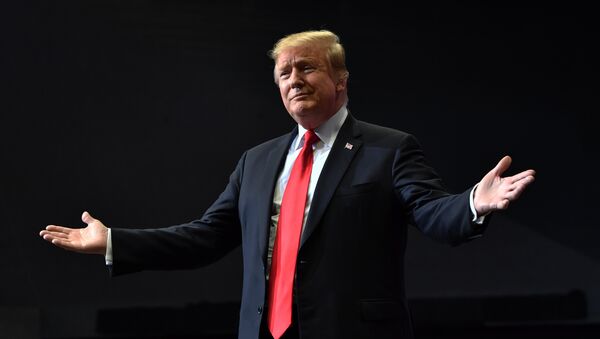 © AFP 2023 / Nicholas Kamm
Subscribe
International
India
Africa
WASHINGTON (Sputnik) - US President Donald Trump in a statement on Wednesday said he is confident Iran will soon come to the negotiating table to discuss its nuclear program.

Trump said in his new series of Twitter posts that he is sure that Iran "will want to talk soon," commenting on his decision making on Washington's policy in the Middle East.

​"I'm sure that Iran will want to talk soon," Trump said via Twitter, while denying reports that his administration is divided on matters of Middle East policy.

World
If Iran Does Anything, It Will be Very Bad Mistake - Trump Amid Soaring Tensions
Previously, a report by The New York Times reported that acting Defence Secretary Patrick Shanahan last Thursday presented a plan to deploy 120,000 US troops to the Middle East if Iran starts to develop nuclear weapons, suggesting that Bolton was behind the creation of the plan. Trump denied the plan's existence on 14 May, but didn't rule it out completely, noting that the numbers would be higher if such an approach were adopted.

Tensions in the region have been high recently, as the United States reinforced its military presence in the Persian Gulf with the Abraham Lincoln aircraft carrier and a bomber task force to send "a clear and unmistakable message" to Tehran. Washington also approved the additional deployment of the Patriot missile defence system and Arlington amphibious warship to the region. Iran has repeatedly expressed its readiness to retaliate in the event of a military conflict.