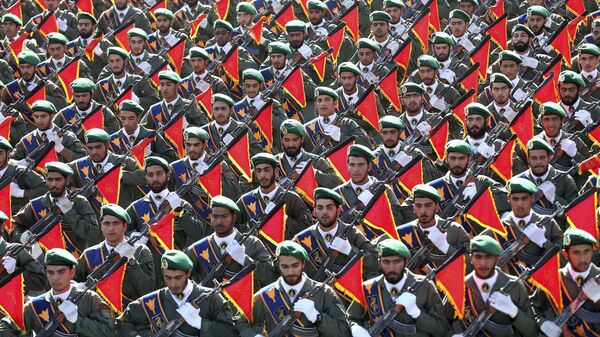 © AP Photo / Ebrahim Noroozi, File
Subscribe
International
India
Africa
Policymakers in Washington, DC, have been hell-bent on replacing the current Iranian government with one more willing to bend to the US' desires since the very early days of the Trump administration, Shabbir Razvi, economist and political analyst, tells Sputnik.

"The rhetoric coming out of Washington since [US President Donald] Trump's election has been only one way," Razvi told Radio Sputnik's Loud & Clear on Wednesday.

"And that is to remove the current government from Tehran and to put some other party in power which will be subservient to the US projects in the Middle East."

The analyst explained that it's because Iran refuses to abide by Washington's rules that it has recently been hit with multiple rounds of sanctions, including those reimposed in 2018 as a result of the US withdrawal from the 2015 Joint Comprehensive Plan of Action.

​Most recently, the US ordered the departure of all non-emergency personnel at the US Embassy in Baghdad and its consulate in Irbil on Wednesday, urging individuals to "depart Iraq by commercial transportation as soon as possible." The order was issued following the collection of intelligence that indicated that Iran or its proxy forces were allegedly intending to attack US forces or interests in the region.

This latest development comes a day after US Central Command placed coalition forces in Iraq on high alert over what it described as a stream of possible threats against them, and several days after Washington increased its presence in the region by sending an aircraft carrier strike group to the Persian Gulf.

Earlier this week, the New York Times reported that Acting Defense Secretary Patrick Shanahan presented US President Donald Trump with a military plan to deploy 120,000 troops to the region in the event that Iran either attacked US forces or appeared to be trying to make nuclear weapons. Trump has claimed that the Times reported "fake news," and that if the US were to follow through on such a plan, it would deploy even more soldiers.

Razvi told host Brian Becker that the reality is that Iran has actually acted as a positive force in the region, especially in its efforts to eradicate the Daesh militant group.

‘Mostly Psychological Warfare’: US Unlikely to Initiate War With Iran
"I don't know where the policymakers and the trio — Trump, [US National Security Adviser John] Bolton and [US Secretary of State Mike] Pompeo are really coming from," he added.

Iranian officials have rejected American allegations of hostility from Tehran, saying instead that Washington is engaged in a game of psychological warfare. Iranian President Hassan Rouhani recently called for unity among the country's political factions as it faces tightening US sanctions.