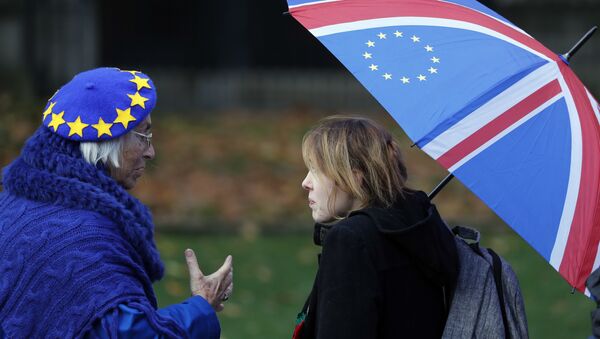 Neil Clark
All materials
I wonder if certain leading Remainers have ever read the book 'How to Win Friends and Influence People' by Dale Carnegie? I'm not sure that they have.

Instead of trying to understand why the 52% voted for Britain to leave the European Union in the June 2016 referendum, and then using Quaker-style 'friendly persuasion'  to try and win people over to their cause, the tactic seems to be to insult them. This approach  is actually helping to boost the Brexit Party who look set for a stunning success in next week's European Parliament Elections.

Take the Liberal Democrats 'Bolxxxxx to Brexit' slogan, which marks a new low in the dumbing down of British politics. Bolxxxxx to 17.4m people who voted Leave? That's really nice, isn't it?

READ MORE: ‘No Chance’ Theresa May’s Brexit Deal Will Get Through Parliament – Journalist

What Esler really means is that he disagrees with these people. Why couldn't he have just left it that?

One of the most shocking comments about Brexiteers was in a tweet (since deleted) from Matt Kelly, the editor of the staunchly pro-Remain New European newspaper.

Westminster 'Bursts Into' Laughter After Fire Alarm Test Disrupts PMQs Address
Commenting on a photograph of a largely elderly Brexit Party audience, Kelly wrote 'Marvel at the diversity, behold the spread of demographics. And bring a mop to clear up all the leaked pxxx afterwards'. Making fun of old people's incontinence?  Again, such ageist and downright unpleasant comments are unlikely to persuade any Brexit supporters to swap sides and take out a subscription for Kelly's newspaper.

Regrettably, mocking the old, and even relishing their death, has been a part of the anti-Brexit campaign for some Remainers.

At a conference in 2017, the novelist Ian McEwan blamed Brexit on 'a gang of angry old men'  and said that by 2019, the country 'could be in a receptive mood' with '1.5 million oldsters, mostly Brexiteers, freshly in their graves'. What a delightful thing to say. Let's hope none of the '1.5m oldsters' are buyers of McEwan's books.

You even suspect some Remainers would favour the compulsory euthanasia of elderly Leave voters so the result of 2016 could be overturned.

It's not just the age of Brexit supporters that has been attacked, but their educational attainments too. In 2017 a Labour MP, Barry Sheerman, said that Remain voters 'were the better educated people in our country'. Now he may well be right that graduates were more likely to vote Remain than non-grads, but again, was this the right way to try and win people over?

Rightly or wrongly it came over as being snobbish and elitist.

It's also unlikely that Bob Geldof's statement that he 'resents' those who voted Leave did much good either.

Even sex has been brought into it. In response to a video of Ann Widdicombe addressing a Brexit Party rally, one Tweeter wrote 'If the future of the UK is a 70-year old virgin with a shrill voice addressing a room full of white people where the average age is 65, I don't want to be part of it'.

Now I'm not in agreement with a lot of her politics, but as Tweeter Grace Aspey pointed out, is Widdicombe's age or sex-life (or lack of it) anything to do with arguments for or against Britain leaving the EU? Are 70-year-old virgins precluded from the national debate? If so, that really would be virgin' on the ridiculous.

Ann Widdicombe has many many faults, her age and sex life (or lack thereof) aren’t examples of them. Get a better argument. pic.twitter.com/orekf4xPe8

​And do we have to have special colour and age-band quotas for an political audience to be deemed legitimate?

It's important to stress that not all Remain supporters have been behaving like this.  Some have tried to persuade people to support their cause in a nice, friendly way. It's also true that there has been rudeness too from some Brexiteers. Labelling people 'traitors' for instance for believing that Britain's best interests are served within the European Union is over the top.

Pro-Remain Mag Editor Provokes Rage With Comments About Brexit Party Supporters
But the onus is on Remainers, who after all did lose the vote in June 2016, to show more contrition. Instead of going down the 'Let's be  rude about Brexiteers' road, it would have been much better for them to have accepted the referendum result, and then, if they wanted to, start campaigning for another referendum once Britain had left the EU. Even if they wanted the referendum result to be reversed,  because they thought people had made a  big mistake, they could have gone about it in a better way.

As it is, the newly-formed Brexit Party and their leader Nigel Farage are on course for a historic win in next week's elections.

My advice to Remainers is to stop saying 'Bollxxxx' —and start reading Dale Carnegie.