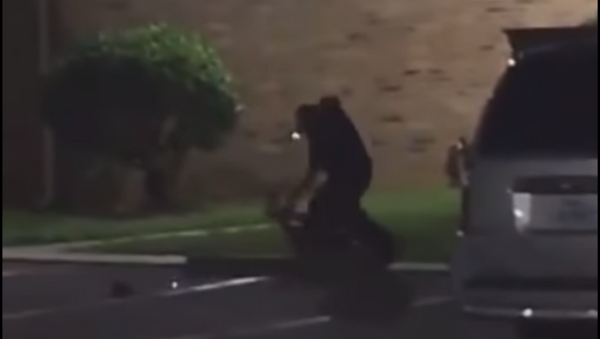 © Screenshot/Tom Cleary
Subscribe
An officer with Texas' Baytown Police Department came under fire this week after cellphone video surfaced showing him discharging his department-issued firearm five times during a confrontation with woman believed to be pregnant. The woman died at the scene.

The officer-involved shooting incident unfolded at the Brixton Apartment complex in Baytown, Texas, at roughly 10:40 p.m. local time on Monday. Local media reports indicate that the unidentified officer, who is an 11-year veteran with the force, initially approached 44-year-old Pamela Turner because he knew multiple warrants had been issued for her arrest for prior alleged offenses.

Video of the altercation shows that things quickly escalated between the officer and Turner as the law enforcement official attempted to place Turner in handcuffs. At that time, she can be heard yelling out to the officer that she was simply walking home.

The two eventually land on the ground, with the officer standing over Turner, after the officer's stun gun is deployed. "Why? Why? I didn't do anything to you," Turner says as the struggle continues.

"I'm pregnant," are the last words that Turner yells before the officer discharges his firearm. Video of the deadly confrontation cuts off seconds after Turner's body slumps to the ground.

A statement released by the department's Lt. Steve Dorris reveals that during the struggle Turner somehow managed to gain control of the officer's stun gun and deploy it on him. It was this move that ultimately prompted the officer to fire multiple bullets at Turner. The release goes on to note that Turner was pronounced dead at that scene and that she was struck at least once.

Antoinette, Turner's sister, told local station KPRC that the officer was her sister's neighbor and that her sibling had previously filed complaints against the cop for harassing her. She also revealed that her sister was on medication for schizophrenia. Antoinette was unable to confirm whether Turner was pregnant.

Officials have not yet confirmed whether the officer did in fact live near Turner or if complaints had been filed by Turner.

Residents of the apartment complex told the station that Turner was harmless and that she typically just walked around the neighborhood with her pet. "She would walk her dog. That's all she did was walk her dog and pick up trash… She didn't mess with anybody. It was just her and her dog," resident Jonathan Little said.

Investigators are reportedly attempting to get in contact with the individual who recorded the confrontation and shared it on social media. Dorris told reporters on the scene that he was shocked someone recorded the event.

"It's unfortunate that somebody takes a tragic incident like this and posts it on social media," Dorris said. "It's extremely disrespectful for everybody involved, but that's the day and age we live in with social media."

It's unclear whether the officer involved in the incident captured the events on his bodycam.

Per department policy, the officer has been placed on three days of paid administrative leave, the Baytown reported. The shooting is also being investigated by officials with the Harris County District Attorney's Office.

000000
Popular comments
Another crazed execution revolting to watch he emptied his auto into her like she was a target dummy. These guys are very sick and that was plain and simple murder i hope he rots in jail. Time Trump sorted this murderous aggression out ! How can you just empty a gun into a unarmed women its pure evil. Trump needs to bring back executions for these types of crimes against communities.

Rasputin002
14 May 2019, 22:34 GMT14
000000
I wish I didn't watch that. Cruel, vile,savage beasts, at home as well as abroad.
Foxylady
14 May 2019, 22:13 GMT12
000000
Newsfeed
0
New firstOld first
loader
LIVE
Заголовок открываемого материала
Access to the chat has been blocked for violating the rules . You will be able to participate again through:∞. If you do not agree with the blocking, please use the feedback form
The discussion is closed. You can participate in the discussion within 24 hours after the publication of the article.
To participate in the discussion
log in or register
loader
Chats
Заголовок открываемого материала
Worldwide
InternationalEnglishEnglishMundoEspañolSpanish
Europe
DeutschlandDeutschGermanFranceFrançaisFrenchΕλλάδαΕλληνικάGreekItaliaItalianoItalianČeská republikaČeštinaCzechPolskaPolskiPolishСрбиjаСрпскиSerbianLatvijaLatviešuLatvianLietuvaLietuviųLithuanianMoldovaMoldoveneascăMoldavianБеларусьБеларускiBelarusian
Transcaucasia
ԱրմենիաՀայերենArmenianАҧсныАҧсышәалаAbkhazХуссар ИрыстонИронауОssetianსაქართველოქართულიGeorgianAzərbaycanАzərbaycancaAzerbaijani
Middle East
Sputnik عربيArabicArabicTürkiyeTürkçeTurkishSputnik ایرانPersianPersianSputnik افغانستانDariDari
Central Asia
ҚазақстанҚазақ тіліKazakhКыргызстанКыргызчаKyrgyzOʻzbekistonЎзбекчаUzbekТоҷикистонТоҷикӣTajik
East & Southeast Asia
Việt NamTiếng ViệtVietnamese日本日本語Japanese俄罗斯卫星通讯社中文（简体）Chinese (simplified)俄罗斯卫星通讯社中文（繁体）Chinese (traditional)
South America
BrasilPortuguêsPortuguese
NewsfeedBreaking
22:38 GMTAlternative for Germany to Continue Supporting Nord Stream 2 After Election - Co-Chairman
22:01 GMTMilitants in Aleppo Tried to Force Way From Turkish-Controlled Area - Russian Military
21:48 GMTGermans See No Use to Vote for CDU Without Merkel at Helm - Afd Politician
21:19 GMTGerman Conservatives Suffer Catastrophic Defeat in General Election – Senior Official
21:00 GMTGermany's FDP Leader Hints at Coalition Talks With Greens
20:45 GMTMacron Files Complaint Against Paparazzi for Invasion of Privacy - Reports
20:16 GMTTwitter Removes Blue Verified Badge From Accounts of Several Afghan Ministries - Reports
20:00 GMTLaschet, Scholz Want Coalition Talks to End by Christmas
19:41 GMTCIA Was Ready to Start Firefight in London to Prevent Russia From Busting Out Assange, Media Claims
19:20 GMTSuicide Pact? Top Labour Remainer Says Party Should Campaign to Rejoin EU
18:58 GMTVideo: Miss France 2019 Confronted by 'Teenage Gang' That Threw Stones at Her in Paris
18:47 GMTFree For All! Enraged Moped Drivers Fight in London Amid Lack of Fuel - Video
18:39 GMTPSG's Kylian Mbappe Caught on Camera 'Lamenting Neymar Would Not Give Him Passes'
18:35 GMTPowerful 5.7-Magnitude Earthquake Hits Philippines' Largest Island Luzon
18:00 GMTInfrastructure Plan: Pelosi Says She 'Never' Brings a Bill to Floor 'That Doesn't Have the Votes'
17:43 GMTUsyk vs. Fury? Gypsy King's Twitter Like Leaves Fans Buzzing About Possible Heavyweight Clash
16:50 GMTLabour Leader Demands Visas For 100K Foreign Lorry Drivers Amid Global Shortage
16:33 GMTLabour Staff Cuts That Prompted Strike Ballot Due to £2m-a-Year Legal Costs
16:23 GMTDHS Chief Reveals Up to 12,000 Haitians Who Crossed Southern Border Were Released Into US
16:21 GMTTurkey Wants US Military to Leave Syria, Iraq After Afghanistan Withdrawal, Erdogan Says