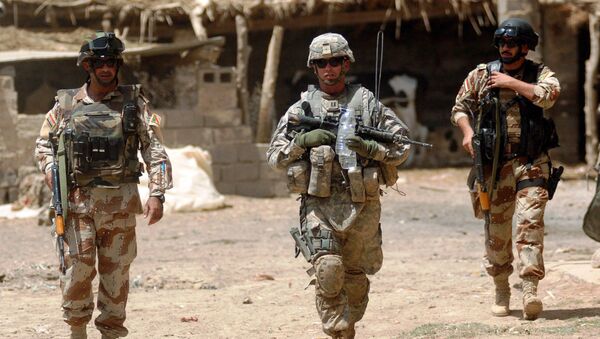 The US has already increased its military presence in the region amid growing tensions with Iran, sending an aircraft carrier strike group to the Persian Gulf. However, a recent New York Times report suggested that the military presence could expand to the level at the time of the Iraq invasion.

"Would I do that? Absolutely. But we have not planned for that. Hopefully we're not going to have to plan for that. And if we did that, we'd send a hell of a lot more troops than that", Trump said.

Earlier the same day, Iranian envoy to the UN Majid Takht Ravanchi accused the US of waging "psychological warfare" against Tehran, while commenting to CNN on a recent report that the Pentagon had allegedly presented a plan to deploy 120,000 additional troops to the Middle East if Iran decides to develop nuclear weapons.

Ravanchi pointed out that Iran was not interested in creating tensions in the region, unlike certain other countries.

The Iranian ambassador said he failed to comprehend the threats issued earlier by US President Trump, who claimed that it would be "a very bad mistake" if Iran "do[es] anything" to US forces stationed in the region. Ravanchi stressed that it was the Americans who were deployed in "the Persian Gulf area", far away from their homeland, while Iran has never approached US borders with weapons.

The UN envoy further argued that Washington's current approach to communicating with Iran would bear no fruit and would not result in any change to its policies.

"The policy of maximum pressure and the offer of a dialogue are mutually exclusive. They cannot expect Iran to accept an offer under pressure. […] We cannot accept a dialogue based on coercion, based on intimidation and threats", Ravanchi said.

The Iranian envoy's statements come in light of a New York Times report, citing anonymous sources, that acting Defence Secretary Patrick Shanahan had presented an updated plan suggesting the deployment of 120,000 soldiers to the Middle East in case Iran would accelerate its nuclear weapons development or attack US forces in the region. The plan, however, didn't propose a land invasion of the Islamic Republic.

The US president earlier threatened Iran that it would be "big mistake" if it were to attack American troops in the Middle East. His threat was preceded by an announcement of the deployment of the USS Abraham Lincoln carrier strike group to the Persian Gulf and a reported dispatch of a taskforce of B-52 strategic bombers to the Middle East region.