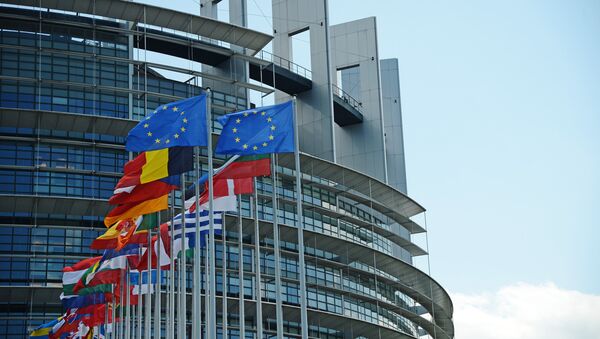 © Sputnik / Alexey Vitvitsky
/
Go to the photo bank
Subscribe
For the first time, right-wing leader Marine Le Pen's party Rassemblement National (RN), formerly the National Front, overtook French President Emmanuel Macron's party La République En Marche (REM) according to a recent Ipsos poll ahead of the EU election this year. However, other daily polls have shown the RN in a pole position before.

EU elections will be held on 26 May in France. The poll of 1,500 people was conducted on 2-3 May, after Macron announced a series of proposals, including tax cuts worth 5 billion euros ($5.6 billion), in a bid to appease the "yellow vests" anti-government protest movement.

Chris Reynolds: Well, I think the results are really quite significant. They signal quite worrying developments in terms of the forthcoming European election. However, they are not really that surprising, despite the fact that they would be worrying and significant. We only have to think back to 2014 and the previous European elections to see that we had a similar set of results back in 2014.

So to many observers and commentators, this set of results was not completely unexpected, but I suppose it does ask us some big questions about what is going on in France at the moment and also in terms of the French population's relationship with the European Union. First of all, the voter turnout isn't very strong and as a result of that, those people who do vote often use the European elections as a way to sort of cast some sort of judgement on or frustrations, perhaps, with the domestic political situation.

And as a result of that sometimes the European elections and therefore the European project becomes somewhat of a scapegoat for some of the problems that are being experienced at the domestic level and in a way perhaps the French population will try to punish the political elite and, in this case given the very pro-European stance of Emmanuel Macron, you could try and read into these results as a comment on their ongoing frustrations with the domestic situation. But nevertheless, there remains a very significant development, really quite worrying in terms of the future of politics in France, but also the European project.

Sputnik: What implications could these results have on the upcoming EU elections?

Chris Reynolds: Well, if these results, if the poll results were to play in the actual results, there would be serious implications both at the European level, but also at the domestic level. So from the European Union's perspective, the simple consequence would be that a significant number of parliamentarians would be sent to Brussels from France and these parliamentarians would be — to diplomatically describe them — Eurosceptic, people who are either opposed to the project itself, or certainly opposed to the current direction of travel.

So one can't help but see this as further confirmation of the growing popularity or acceptance of a sort of far-right parties, as former National Front's Marine Le Pen and her Eurosceptic policies and ideas, but also all the other policies and ideas that accompany her party as well. I think that these results will further give credibility to Marine Le Pen and further confirm the increasing popularity of, what were once considered quite marginal, political parties have now become really mainstream political parties and having a serious impact on domestic politics in France.

Sputnik: Speaking about the domestic politics following these results and the ongoing yellow vests movement, what changes, if any, could we expect to see in France's internal politics?

Chris Reynolds: Well, we are going through quite an interesting period here, where Emmanuel Macron is kind of coming up to two years in power and many see his latest attempts when he addressed the population following his Grand Debate with the population and announced some changes as an attempt by Macron to somehow reboot his presidency in the face of some of the difficulties that he has been experiencing, particularly as evidenced by the "Gilets Jaunes" (yellow vests) movement.

In reality, it is very hard to see any real and substantial change to the direction of travel of Macron's presidency. He said that some of the changes around what he would like to do as a result of his consultation with the population and his announcement in what is perceived as a kind of reboot of his presidency. To what extent that has been successful — I am not convinced that the population has indeed been convinced by what he has announced and sees these reforms and changes that he has announced as really reflecting their demands and their desires.

So it is hard to see what real change we are going to see within the domestic scene at the moment. You have to understand, from the European perspective, in any way Europe has been such an important plank of Emmanuel Macron's presidency from the outset during the campaign and ever since he has become president that I can't see him diverting from his very pro-European stance, despite the fact that there are clearly some concerns within the French population in regards to the direction of travel of the European project.

European Parliament Condemns Weakening Rule of Law in Some EU States
But then, in order for there to be a real change, one would have assumed that that would require some sort of other credible political opposition and when you consider how the mainstream left and the mainstream right are continuing to struggle to get back on their feet after the disastrous election of 2017, it is really hard to see how there is any other political alternative out there, so it is very much a pro-European stance by Emmanuel Macron versus this increasingly popular anti or Eurosceptic direction of travel.

It is really a worrying time, one which is filled with great uncertainty — it is not helped by the fact that we still have the shadow of Brexit hanging over everything which I think everyone is waiting to see what happens with Brexit and the European elections before we can really work out what the next steps are going to be.

Sputnik: Speaking about the right-wing process, France is not the first European country where they have gained political weight. What consequences can we expect to see for the European Union in general?

Chris Reynolds: Well, again, I don't think that these results and the current ongoing uncertainty and undoubted popularity of Eurosceptic ideas are equally worrying at the European level. So, of course, France is not the only country to be experiencing this type of backlash against the European project. And again, you know, I think we need to be very careful in trying to sort of equate these results as a simplistic anti-European sentiment. I do think that we need to take into consideration the fact that there is a general frustration and distrust within national populations with their political elite.

READ MORE: Le Pen Would Do Better Than Macron on Migration — Poll

However, having said that, we are going through a period when there are undoubted question marks around the popularity or the support for the European project. So again, we only have to look at what is happening with the Brexit context in order to make sense of the doubts that are around, both at the UK level, but the doubts that it then opens up for other countries as well. As you know, the credibility afforded those countries that are opposed to the European Union can only be enhanced by Brexit‘s outcome, not that that's guaranteed in any way, shape, or form.

So the context of uncertainty around Brexit, the changing of the guard in German politics, and this more general uprising in anti-European sentiment and populist politics all around Europe certainly leads one to think that this is: a) not a French phenomenon; and b) quite a worrying set of circumstances to the European project.

Not only in Germany are we entering a period of instability, but in the French context as well we are seeing the rise of credibility around anti-European sentiment. When you consider that the Franco-German axis has been the cornerstone that has helped the European project advance and get through these crises and develop and advance, then one can understand why this could be interpreted as being quite a worrying time for the European project.