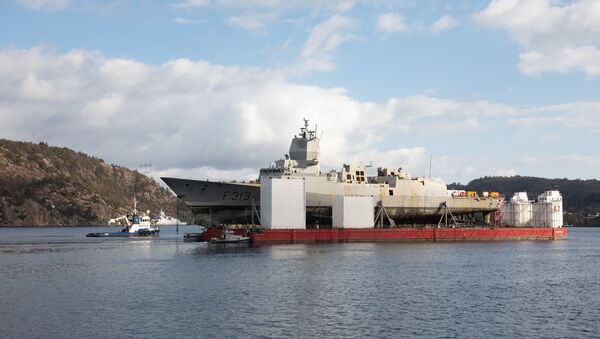 Although raised and set afloat after four months underwater, the frigate Helge Ingstad, which sank following NATO drills in late 2018, is far from operational and still demands enormous investments.

Repairing the frigate KNM Helge Ingstad will cost over NOK 12 billion ($1.37 billion), which is three times as much as its original cost, the newspaper Bergens Tidende reported.

"The cost of repairing the frigate will exceed NOK 12 billion. Building a new one will be cheaper", the damage assessment to be presented on Wednesday said.

Norwegian Defence Materiel Agency communications adviser Vigdis Hvaal said that no comments will be issued until the Wednesday condition report, which will determine the frigate's future.

It set the Norwegian military budget back NOK 4.3 billion (almost $500 million) to buy the frigate. The ship was delivered in 2009. The costs of the Helge Ingstad's replacement haven't been estimated yet, but the defence department reckons that ordering several ships at once will be much cheaper, as restarting production for just one ship could result in a disproportionately high per ship cost.

"When you talk about the costs associated with building a new frigate, it is important to remember that building just one is far more expensive than building more", the Norwegian Defence Materiel Agency concluded.

The price for a new frigate is expected to be lower than the cost of repair.

In their annual report, the Armed Forces wrote that it is relevant to consider re-using the details for remaining vessels or sell the steel.

The loss of the KNM Helge Ingstad has left Norway's defence capability weakened, adding an extra burden on the four remaining frigates.

The Helge Ingstad collided with the Maltese-flagged tanker Sola in November of last year while heading back after the major NATO exercise Trident Juncture, billed as the largest on Norwegian soil in decades. While some of the 137-member crew sustained light injuries, the frigate suffered a 45-metre-long gash on its starboard and went down shortly after. The tanker, by contrast, emerged from the collision with only minor damage and is back in service.

The frigate remained underwater for almost four months before it was raised and transported to Haakonsvern in Bergen. On 10 April, the frigate was relaunched after the gash was plugged using steel plates. So far, rescuing, salvaging and transporting costs associated with the accident cost NOK 726 million ($83 million), according to the 2018 Armed Forces annual report.