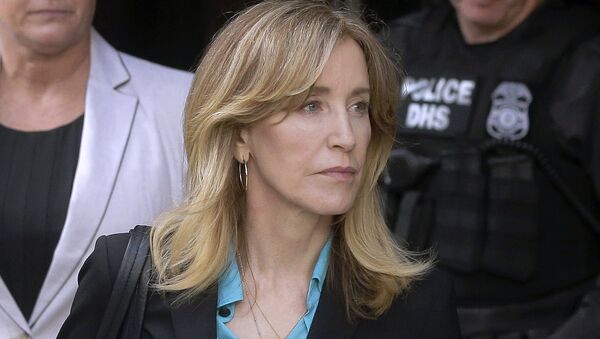 © AP Photo / Steven Senne
Subscribe
The past several months have been rife with legal controversies involving big-name actors, singers and athletes: from college admissions scams and allegedly staged attacks, to accusations of sexual abuse and working as sex cult recruiters.

READ MORE: US Judge Says Huffman Could Be Released on $250,000 Bail in College Bribery Case

Prosecutors said that the 56-year-old actress paid the whopping sum to a fake charity operated by admissions consultant William Singer, who had a proctor correct Huffman’s daughter’s answers.

Huffman, who is one of dozens of parents, including celebrities and business executives, facing charges in the nation’s largest-ever college admissions scam, now faces four months in prison and $20,000 in fines.

Huffman also says she understands that by pleading guilty, she's giving up her right to a fair trial. Huffman says she signed a plea agreement April 4, (that was the day after she appeared in court here in Boston the first time.)

The “Desperate Housewife’s” guilty plea has set off a major landslide on social media, as Twitter literally exploded with all sorts of reactions:

I have no doubt others will disagree, but I strongly believe that Harvard should be penalized much worse than her. Of course she is guilty, but if this practice wasn’t acceptable it never happens to begin with. It’s been going on long before she came along. Thoughts everyone?

Spoiler alert 🚨 she’s not going to spend a second in a cell.

That is not even one full semester…

MEANWHILE: Tanya McDowell, a homeless mom, was charged with larceny for enrolling her 5-year old son in a neighboring public school district.

She was sentenced to 5 years.. YEARS.. in prison.

I don't feel that's enough of a deterrent for future scammers.

Going to jail just a waste of my tax payer dollars, I think they should have to pay the full amount for 1 or more students to go to college for 4 years.

In light of Huffman’s admission, here’s a selection of arguably the biggest celebrity legal scandals that have shaken the whole world over the past few months:

The grammy-winning R&B star has been all over the news since the release of the explosive docuseries “Surviving R. Kelly”, which sparked renewed interest in allegations of sexual misconduct by him. For decades he’s been haunted by sexual abuse against underage girls and women that were fuelled by reports of his later annulled marriage to his 15-year-old protégé Aaliyah in 1994 while he was 27 years old.

SNL Lands in Hot Water After Equating Catholic Church With R Kelly
The “I Believe I Can Fly” singer has always denied the allegations, but after the documentary premiered to big ratings, calls for him to be investigated were renewed.

In February, he was charged with 10 counts of aggravated sexual abuse and now faces up to 70 years in jail on charges of sexual abuse of four women, including three minors ranging in age from 13 to 16.

Kelly pleaded not guilty, denying claims that he had beaten, starved, and held women against their will.

In late January, the “Empire” actor made it into breaking news after reports emerged that he had been hospitalised after being attacked by two unidentified people in Chicago, Illinois.

‘Empire’ Star Says Jussie Smollett Won’t Be Fired Over Staged Hate Crime Hoax
Jussie Smollett, who is openly gay, told police that the two assailants were wearing ski masks and yelled “Aren’t you that f****t ‘Empire’ n*****?” before beating him, placing a rope around his neck and pouring an unknown substance on him. He also said that the perpetrators yelled “This is MAGA country!” before fleeing the scene.

Initially, law enforcement treated the incident as a potential hate crime, but the trajectory of the investigation shifted after they arrested two men in connection with the attack, later identified as Nigerian brothers Olabinjo and Abimola Osundario.

The brothers were released without being charged, and a couple of days later Smollett was officially treated as a suspect in the probe following multiple media reports suggesting that Chicago police believed Jussie had staged the assault, having allegedly paid the duo $3,500 to attack him.

Even though Jussie has denied any wrongdoing, he turned himself in to police, and shortly after was indicted by a Chicago grand jury on 16 felony counts of disorderly conduct for filing what law enforcement said was a false police report.

In two weeks, as support for Jussie became — to put it mildly — less vocal, with many speculating that the attack was a hoax, prosecutors mysteriously dropped all charges against Smollett without providing further clarification.

The arrest of Grammy-nominated rapper 21 Savage, who holds British citizenship, in February by US Immigration and Customs Enforcement (ICE) for allegedly staying in the States illegally after his 2005 visa expired sent shockwaves across the world.

Chris Brown Snaps at Rapper Offset for Calling Him 'Lame' Over 21 Savage Meme
While for many, his British roots became a revelation (and an inexhaustible source of memes), his lawyers confirmed that their client, whose real name is She’yaa Bin Abraham-Joseph, was born in the UK, but legally entered the US when he was seven years old.

At the time, fans speculated that he was targeted by ICE due to the song "A Lot", which included lyrics condemning the behaviour of immigration officers for their detention of children at the US-Mexico border; 21’s legal team, however, could not confirm those rumours.

The rapper, who was released on bond several days later, still faces deportation and potentially a ban of at least 10 years against returning to the US, where his entire family, including three US citizen kids, lives.

Renowned footballer Cristiano Ronaldo found himself at the epicentre of a legal scandal in September 2018 after 34-year-old Kathryn Mayorga filed a lawsuit against the Portuguese forward, having accused him of raping her in a Las Vegas hotel in 2009.

The woman alleged that she met Ronaldo at a night club and they moved to his luxurious suite, where the footballer came on to her despite her protests and screams to stop.

Cristiano Ronaldo Rape Accuser's Lawyers Reportedly Probing Three More Claims
The lawsuit claims that Mayorga was pressured into signing a non-disclosure agreement in 2010 after reaching an out-of-court settlement for $375,000.

Las Vegas authorities investigated her complaint in 2009, but ultimately backed off after the alleged victim failed to provide detectives with the location of the incident or suspect description.  In September 2018, police reopened a criminal investigation into the case, following up on fresh information.

The footballer has consistently denied the rape allegations as “fake news”, and said that despite his willingness to clear his name, he would not “feed the media spectacle created by people seeking to promote themselves at my expense”.

And last but not least: Allison Mack, the former star of the hit series “Smallville”, was arrested in April 2018 on suspicion of being the second-in-command of NXIVM, a sex cult that preyed on vulnerable young women, trying to lure them into serving as “slaves” for male “masters”.

Last month, Mack pleaded guilty to racketeering (including extortion and forced labour) as well as racketeering conspiracy and now faces up to 20 years in prison.

The Smallville alum, who is now under house arrest, is reportedly planning to testify against alleged NXIVM leader Keith Rainere, who was recently accused of possessing child pornography and having a relationship with a minor.

000000
Popular comments
Celebrity comes with its perks, but also a lot of woes it seems.