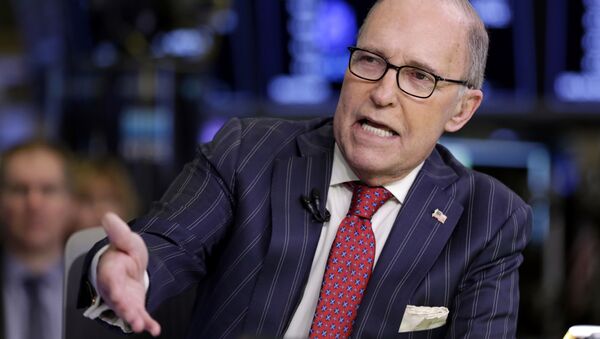 © AP Photo / Richard Drew
Subscribe
International
India
Africa
White House Economic Adviser Larry Kudlow said in an interview with Fox News that US consumers would eventually suffer a financial burden from the ongoing US-China trade dispute, contradicting earlier statements made by the US president that the new round of tariffs on $200 billion worth of imports from China would benefit the US.

During the interview, Kudlow was repeatedly pressed by Fox News anchor Chris Wallace about Trump's claims that Beijing will pay for imposed duties.

"It’s not China that pays tariffs. It’s the American importers, the American companies that pay, what in effect is a tax increase and oftentimes will pass it on to US consumers", Wallace said.

READ MORE: Scholar: Chinese Companies Will Switch to Europe Instead of US Amid Trade War

"Fair enough," Kudlow responded, adding after the anchor's interjection — "if it’s a tariff on goods coming into the country, the Chinese aren’t paying" — that "In fact, both sides will pay. Both sides will pay in these things", Kudlow said.

"The Chinese will suffer [gross domestic product] losses and so forth with respect to a diminishing export market and goods that they may need," Kudlow stressed.

Analyst Explains Why European-US Trade War Matters to China
The anchor continued pressing Kudlow to clarify whether "it’s US businesses and US consumers who pay, correct?"

However, Kudlow responded by saying he did not disagree with that assessment, stressing that both sides will suffer because of new tariffs.

On Friday, Trump increased the level of tariffs from 10 percent to 25 percent on about $200 billion worth of Chinese imports. He also ordered tariffs to be raised on all remaining US imports from China, which are valued at around $300 billion.

Trump has said that the latest tariffs would produce "massive payments" that would go directly to the US Treasury Department.

Earlier this week, Trump stated that the possibility of removing the duties depended on the outcome of future negotiations between Washington and Beijing.

Beijing has already vowed to retaliate against Washington's latest move to impose 25 percent tariffs on $200 billion worth of Chinese goods.

The trade dispute between the United States and China has been escalating for over a year, as both nations have repeatedly slapped billions of dollars’ worth of retaliatory tariffs on each other as the rivalry between them soars.