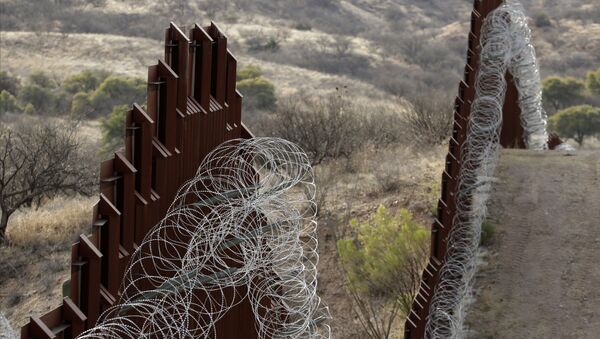 © AP Photo / Charlie Riedel
Subscribe
International
India
Africa
MOSCOW (Sputnik) - The US Defence Department's funding for the construction of a wall on the border with Mexico will partially come from programmes related to the modernisation of a ballistic missile and an airborne warning and control system, The Washington Post reported, citing a document prepared by the department.

"The Department carefully selected sources for the reprogramming that are excess or early to need and will not adversely affect military preparedness", the document said, as quoted by the newspaper late on Sunday.

According to the document, a part of the funding will be redirected from a programme aimed at modernising the ground infrastructure for the LGM-30G Minuteman III intercontinental ballistic missile.

The Pentagon intends to divert money from a programme related to a system that is used by planes to detect and communicate the position of targets to attack because the programme has been "slightly delayed", the newspaper noted.

The Defence Department will also reallocate money originally given to a "space test experiment" with the participation of the Defence Advanced Projects Research Agency, the newspaper added.

Artist Protests Against Trump Wall by Building a Wall Made of… Cheese
On 10 April, the Pentagon signed almost $1 billion in contracts with two entities on the construction of the wall. On 10 May, the Defence Department announced that it was drawing $1.5 billion from various sources, including an Afghanistan-related programme, to help fund the project.

The construction of the wall on the US-Mexican border to prevent the flow of undocumented migrants and drug trafficking to the United States was one of US President Donald Trump's main campaign pledges.

The president, however, has been struggling to find financing for the wall as Congress has refused to allocate billions of dollars from the budget. In order to bypass Congress and secure the necessary funding, Trump declared a state of national emergency on the US southern border.