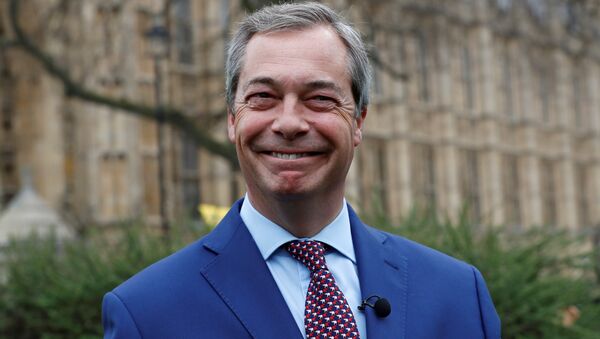 © REUTERS / Stefan Wermuth
Subscribe
The British politician has repeatedly criticised Hungarian-American billionaire George Soros, even branding him “the biggest danger to the entire western world”, according to The Guardian.

The Brexit Party has stood up for one of its co-founders, Nigel Farage, dismissing allegations that his remarks, taking aim at financier George Soros, were anti-Semitic. The party’s spokesman, cited by The Guardian, referred to the claims as “an exceptionally feeble attempt to portray Nigel Farage as an anti-Semite”. The party stated that nothing substantiates the allegations voiced by several groups and British lawmakers over a report by The Guardian on the politician’s statements to the US website Infowars.

“Anybody with an iota of intelligence or objectivity will see right through it. This long list of supposed ‘revelations’ amounts to nothing more than a reasonable and measured critique of the well-known political activities and ambitions of a high-profile billionaire”, the spokesman said.

He also lambasted the British outlet, noting “this manufactured story is pathetic”. Farage himself has not made a statement on the matter. The Guardian researched Farage’s appearances on Alex Jones’s show, concluding that the former head of UKIP had repeatedly “discussed conspiracy theories, some of which have been linked to anti-Semitism”.

According to them, Farage, whose party is leading in the polls for the European elections, dubbed Soros “the biggest danger to the entire western world”, said that he “wants to break down the fundamental values of our society and, in the case of Europe, he doesn’t want Europe to be based on Christianity” and alleged “the Goldman Sachs, the JP Morgans, and a particular Hungarian called Mr Soros” funded the EU.

For his Infowars discussions, Farage came under fire from the anti-Semitism watchdog Community Security Trust, the Board of Deputies of British Jews that called on the politician to “repudiate these ideas and to commit not to dignify oddball nasties like Alex Jones with his presence again”.

“Anti-Semitic conspiracy theories have been causing harm for centuries. Those who speculate about conspiracy theories, therefore, run the risk of energising anti-Semitism, particularly if they combine that with reference to individuals from the Jewish community”, Conservative Theresa Villiers said as cited by The Guardian.

Soros, a Hungarian-born US billionaire, financial speculator and philanthropist, has been a generous left-wing donor prompting criticism from right-wing politicians in Europe, who accuse him of interfering in their countries’ affairs.

One of his most persistent critics, Hungarian Prime Minister Viktor Orban, has repeatedly accused Soros of endorsing mass immigration to Europe as part of a plan to weaken European nations and their “Christian European identity”, and criticised the billionaire's Open Society Foundations NGO, which he said endorses this policy.