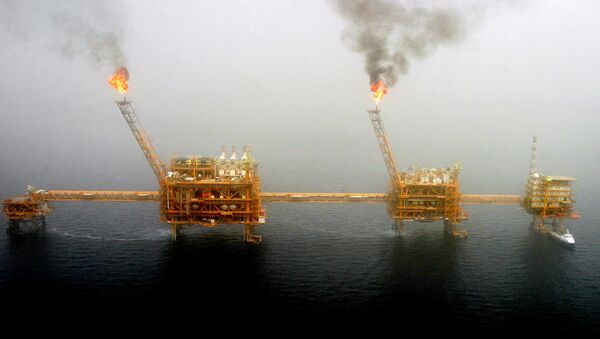 © REUTERS / Raheb Homavandi
Subscribe
International
India
Africa
The price of oil has recently been rising following news of the US’ increased push to curb Iran’s oil trade and Washington's sanctions against another oil-exporting country – Venezuela, sparking fears of a shortage in crude supply.

World oil prices reacted to the news of an incident that resulted in damage to several oil tankers in the UAE, with prices rapidly increasing during the first half of the day. Both popular oil blends, Brent and WTI had gained around 3% by 13:00 UTC, with Brent futures reaching the price of $72.53 per barrel and WTI — $63.27 per barrel.

Oil Prices on Rise Amid US Announcement to End Waivers for Iranian Oil Buyers
CNN suggested that the price surge could have been caused by fears of a supply crunch due to "sabotage", as the UAE put it, because as an incident left several oil tankers damaged. Although the event didn't result in casualties or a spill, it could still affect the delivery of the oil shipments.

However, another round in the tariff war between China and the US occurred on 13 May, with Beijing imposing between 10% and 25% tariffs on $60 billion worth of US goods, thereby breaking the price rise. Later, prices took a nosedive after 13:30 UTC, prompting the price of Brent to plummet to $69.75 and WTI's to $60.68 per barrel in just three hours and resulting in a roughly 4% drop compared to the midday spike.

CNN indicated that the weak prospects of the trade war being resolved overshadowed concerns relating to the oil supply drop, as now demand is in question.

Ships Sabotaged in UAE Waters Belonged to Norway, UAE, Saudi Arabia - Reports
A total of four tankers were reportedly damaged in an incident near the UAE port of Fujairah on 12 May, with two of them belonging to Saudi Arabia, and the remaining two reportedly sailing under a Norwegian flag and UAE flag. The vessels sustained "significant damage", Saudi Minister of Energy, Industry, and Mineral Resources Khalid Falih stated.

Saudi Ships were set to be loaded with Saudi crude and then sent to Aramco's customers in the United States. The UAE's Foreign Ministry called the incident "sabotage", without going into details.

The explosions in the UAE port of Fujairah were first reported by the Lebanese-based broadcaster al-Mayadeen, but the report was rejected by UAE officials. Later, the UAE confirmed that several ships had been subject to "sabotage operations", but didn't specify under which flags the ships were sailing.