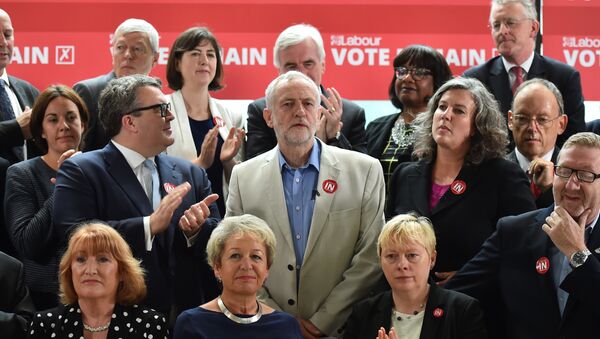 The resurgence of support within Labour for a referendum on the terms of the UK’s Brexit deal comes as polling data reports a significant lead for Nigel Farage’s Brexit Party in the upcoming May 23 EU elections.

UK Labour Party leader Jeremy Corbyn is facing renewed pressure as two of his most senior cabinet ministers have called for a "confirmatory" referendum on the terms of the UK's departure from the EU.

On Monday, May 13, Labour's deputy leader Tom Watson declared that Labour is still a "remain and reform party" adding that it is very likely that a second referendum would be needed for the party's MPs to consider throwing their support behind any Brexit deal.

Speaking on the BBC Radio 4's Today Programme, Mr Watson elaborated that, "I've wanted a [Brexit] deal. I reluctantly came to the view that there should be a confirmatory ballot, because I thought it was the only way we would break the [Brexit] impasse. If a deal could be found that inspires enough notes in Westminster, then fine. But it seemed to me that that's very difficult."

"My idea of a confirmatory ballot is not a religious point, or a point of ideology, it's just — how do you get an outcome, how do you sort this out," Mr Watson added.

For any Labour Leave voter still unsure on whether the party is committed to Brexit or not, its deputy leader Tom Watson just cleared it up: "We are a Remain and reform party."

🙋‍♂️ Support us at https://t.co/iICfFb8qqg

Mr Watson's dramatic admission comes as Jeremy Corbyn has spent weeks bogged down in cross-party talks with Theresa May's Conservatives in an effort to forge a consensus on what a final Brexit agreement should look like.

It also comes hot on the heels of a similar pronouncement by Labour's Brexit Secretary, Sir Keir Starmer, who told the Guardian this weekend that any cross-party Brexit deal that does not come pre-packaged with a "confirmatory referendum" is unlikely to pass parliament.

What makes Keir Starmer and Tom Watson so confident that Remain would win a second referendum? Doesn’t support for the Brexit Party give them any doubts? Surely a Brexit compromise is better for Labour than a second referendum defeat followed by hard Brexit?

"A significant number of Labour MPs, probably 120 if not 150, would not back a deal if it hasn't got a confirmatory vote," Mr Starmer asserted.

"For many of my colleagues, they have made it clear that they will not vote for a deal without a confirmatory vote attached to it. So if you want that stable majority, that has to be taken into account. And without it, it is impossible to see how the numbers would stack up," he said, adding that, "I've made it clear that at this stage, at this 11th hour, any deal that comes through from this government ought to be subject to the lock of a confirmatory vote."

The developments bubble to the surface amid simmering anxieties within both major UK parties that they may haemorrhage voters in the upcoming EU parliamentary elections to emerging parties like Change UK, Nigel Farage's Brexit Party and Independent candidate Tommy Robinson.

"It's really important we make the case that this is not the country of Nigel Farage and Tommy Robinson," Sir Starmer told the Guardian.

Are you sure you want a #PeoplesVote @tomwatson?