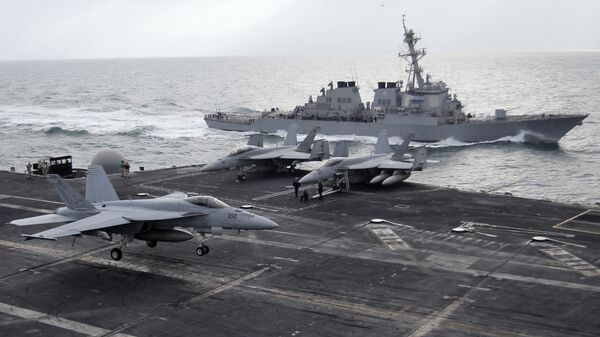 "The presence of the Americans in the Persian Gulf region has reached its end and they must leave the region", Khanzadi said as quoted by the Iranian Students' News Agency (ISNA).

Washington is seeking to increase the likelihood of war by sending an aircraft carrier to the Persian Gulf, he added.

Earlier this week, Acting US Defence Secretary Patrick Shanahan approved the deployment of the Patriot missile defence system and USS Arlington (LPD-24) to the Middle East.

Earlier in the month, the United States said it would deploy the USS Abraham Lincoln Carrier Strike Group and a bomber task force near Iran to an area controlled by the US Central Command (CENTCOM) to send "a clear and unmistakable message" to Tehran.

US Suspects Iran of Moving Ballistic Missiles by Sea to Persian Gulf - Reports
Tensions have been running high between Iran and the United States since May 2018, when US President Donald Trump, a long-time critic of the historic Iran nuclear deal, pulled out of the agreement.

In less than a year, Washington unveiled several rounds of sanctions against the Islamic republic, targeting the country's finance, transport, military and other spheres.

Tehran has informed the ambassadors of China, France, Germany, Russia and the United Kingdom of its decision to suspend some of its obligations under the nuclear deal.

Iranian President Hassan Rouhani announced that he gave European countries 60 days to ensure that Iran's interests were protected under the agreement.