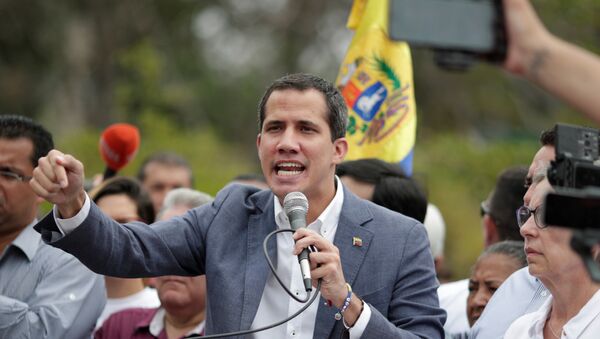 Opposition leader Juan Guaido, who proclaimed himself the interim president of Venezuela in January 2019, earlier admitted that he considers a US military intervention to be a viable option to resolve the ongoing political crisis in his country.

Venezuelan opposition leader Juan Guaido has called on the European Union via Twitter to impose more sanctions on his country in order to apply pressure on the government of elected President Nicolas Maduro, whom Guaido seeks to oust. He believes that such pressure could force the government to open up for foreign humanitarian aid, which Maduro has slammed as an attempt to undermine the country's independence.

Guaido also called on the EU to recognise the representatives of the "government" that he assembled after proclaiming himself interim president in January 2019.

Earlier, Guaido's representative Carlos Vecchio published a letter revealing that the opposition leader had requested a meeting with US Southern Command, a branch of the American military responsible for the Southern American region, to organise "strategic and operational planning" and discuss "cooperation" that had been offered by Washington.

The letter was preceded by Guaido admitting in several interviews that he was mulling over the option to request that the US militarily intervene. Officials in Washington, in turn, including US President Donald Trump, have repeatedly noted that all options, including the military one, are on the table to resolve the Venezuelan political crisis.

Venezuela has been experiencing a worsening political crisis since January, when Guaido proclaimed himself to be the interim president. The United States and 54 countries have recognised Guaido, with Russia, China, Turkey, and numerous other states supporting democratically elected President Nicolas Maduro as the only legitimate head of state in the Latin American nation. Maduro himself has repeatedly slammed Guaido as an American "puppet" who wants to stage a coup in Venezuela to seize power.