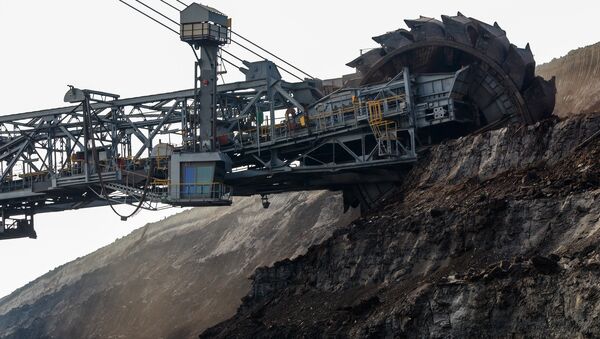 CC BY-SA 4.0 / Calistemon / B4 Reclaimer
Subscribe
Researchers have been proposing to set a special “tripwire” that would issue a warning once humanity is close to mining one eighth of the solar system, which has been preliminarily estimated to occur in just a few hundred years. At that point, there would only be 60 years left to try to offset the detrimental effects.

A team of scientists have come up with a proposal, whereby a so-called “space wilderness” – over 85 percent of the solar system – should be kept intact in order to shield planets, moons, and other celestial bodies from indiscriminate mining and other forms of human exploitation, leaving just a little more than an eighth of the outer space to space firms. The primary goal is thus to ensure that mankind avoids a dangerous scenario where all interplanetary natural resources are permanently exhausted due to the dangerous excesses of industrial activity.

“If we don’t think about this now, we will go ahead as we always have, and in a few hundred years we will face an extreme crisis, much worse than we have on Earth now”, Martin Elvis, a senior astrophysicist at the Smithsonian Astrophysical Observatory in Cambridge, Massachusetts, explained in a new issue of the journal Acta Astronautica, adding that if precautions are not duly taken, and if the solar system has been finitely exploited, “there is nowhere left to go”.

More specifically, Elvis suggests introducing a sort of a “tripwire” that would be triggered “when one eighth of the Solar System's resources are close to being exploited”.

For the time being, profit-seeking space mining firms have been prioritising trillions of dollars’ worth of iron and precious metals hidden in asteroids, along with rare minerals and trillions of tonnes of water found on the Moon. In the UK, for instance, the Asteroid Mining Corporation is known to have set a task of sending a satellite into orbit to map nearby asteroids for further examination.

Not all precious materials are projected to be ferried back to Earth, as much of the mined material is hoped to be used in space to build human settlements there where general conditions permit that, as well as produce rocket fuel. For example, the European Space Agency is eyeing the construction of a full-fledged lunar village, featuring buildings and life-sustaining equipment. At the same time, water ice, such as caches of it beneath the lunar poles, can be split into hydrogen and oxygen and further used to make fuel for probes that can be potentially launched right from the Moon.

In collaboration with Tony Milligan, a philosopher at King’s College in London, Elvis arrived at the conclusion that as space mining shows an annual growth rate of 3.5% that means that a whopping eighth of the solar system’s actual resources would be used up in just 400 years. If that point of no-return is reached, humanity would have only 60 years to apply the brakes and reverse the dangerous trend, according to the scientists.

Since mining the Sun or, say, Jupiter, seems to be a little bit too complicated given the extraordinary surface temperatures and the latter’s gas build-up, Mars and other rocky planets, as well as the Moon appear to be more plausible targets for space miners, since, for example, one eighth of the iron locked up in the asteroid belt exceeds the estimated iron reserves on Earth by a million times, according to the scientist.

Per Elvis, the Valles Marineris on Mars, the most massive canyon in the solar system, might deserve no less protection than the Grand Canyon on Earth, and there are other wildernesses too.

“Do we want cities on the near side of the Moon that light up at night? Would that be inspiring or horrifying? And what about the rings of Saturn? They are beautiful, almost pure water ice. Is it OK to mine those so that in 100 years they are gone?” the astrophysicist posited.

His forecast does not appear to be very far-fetched: “If everything goes right, we could be sending our first mining missions into space within 10 years”, he added, going on to dwell upon what an “enormous profit” it will be “for somebody”. “There will be the equivalent of a gold rush. We need to take it seriously”, the researcher summed up.

000000
Popular comments
Life on Earth is a delicate balance, what is sent into space should be quantified and returned, but I feel that outside the bounds of life then there should be some freedom, presumably such a zone makes some sense of achievement, which presumably is lacking given the current perception of growth throughout the universe.