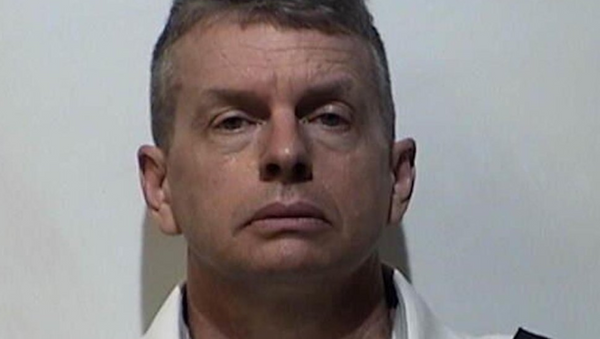 © Christian County Detention Center
Subscribe
International
India
Africa
A pilot for an American Airlines subsidiary was arrested Saturday for an alleged triple homicide of a couple and a man who is believed to have been his neighbor.

According to reports, 51-year-old Christian Richard Martin, a pilot for PSA Airlines, was indicted Friday for the murders of Calvin Phillips and his wife, Pamela Phillips, as well as Martin's neighbor, Edward Danserau. A motive for the murders has not been revealed by authorities.

WATCH: US Woman Body-Slammed by Cop After Filming Arrest of Relatives

All three victims are believed to have been killed in November 2015 in Pembroke, Kentucky. Calvin Phillips was found shot dead in his Kentucky home, while Pamela Phillips' and Danserau's bodies were found in Pamela's burned car in a cornfield a few miles away from Calvin's home.

Martin was indicted by a federal grand jury Friday. He is charged with three counts of murder, one count of arson, one count of attempted burglary and three counts of tampering with evidence. He was arrested at Louisville Muhammad Ali International Airport in Louisville, Kentucky, early Saturday, where he was gearing up to fly a plane to Charlotte, North Carolina.

Passengers scheduled to fly on the plane were shocked by Martin's arrest. Many, however, did not learn that the pilot had been detained on murder charges until later in the day.

​"There are many steps from here, but we hope this is one example of when you never stop seeking justice, when you never give up, that we can truly get important results for these families," Beshear said.

Following the indictment, American Airlines said in a statement that Martin had undergone a background check that revealed no "criminal history that would disqualify him from being a commercial pilot." He had been a pilot for PSA Airlines since January 2018.

"We have an unwavering commitment to the safety and security of our customers and team members, and we will provide any investigative assistance possible to law enforcement throughout their investigation," American Airlines added, also confirming that Martin has been placed on administrative suspension while the case is ongoing.

According to NBC affiliate WSMV, Martin previously served in the military and was involved in a physical and sexual abuse case in 2015, when he was also suspected of mishandling classified information. According to reports, Calvin was a potential witness in the 2015 murders of Danserau and the Phillipses.

Martin was originally listed as a person of interest in the triple homicide case. He denied being involved in a 2016 interview with WSMV.

"I don't know why anybody would want to do something to them," Martin said at the time.