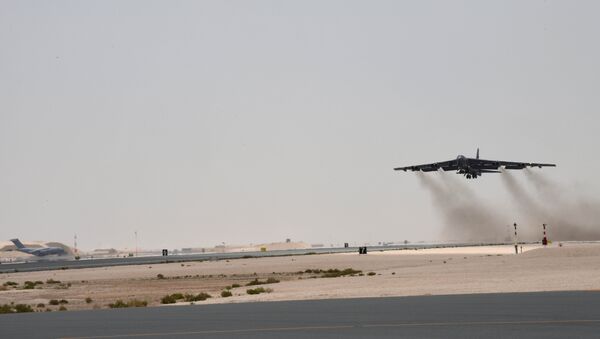 © Staff Sgt. Ashley Gardner
Subscribe
A US Air Force task force of B-52 strategic bombers completed its first mission ‒ a training operation ‒ from its new base in Qatar on Sunday. The nuclear-capable warplanes have been sent to the region as part of US muscle-flexing against Iran.

The four B-52H Stratofortress aircraft showed off their skills over the weekend by flying their first mission, in which they used the US Navy aircraft carrier USS Abraham Lincoln as a "target." The four bombers are based at Al Udeid Air Base in Qatar, where they joined US Central Command (CENTCOM) last week.

"This was the first mission of the Bomber Task Force deployed to US Central Command area of responsibility in order to defend American forces and interests in the region," Air Forces Central Command (AFCENT) said in a brief statement published Monday.

The Air Force also published images on Monday of its F-15C Eagle and F-35A Lightning II strike aircraft flying "deterrence" missions in the region, as well as being refueled by a KC-135 Stratotanker aircraft. 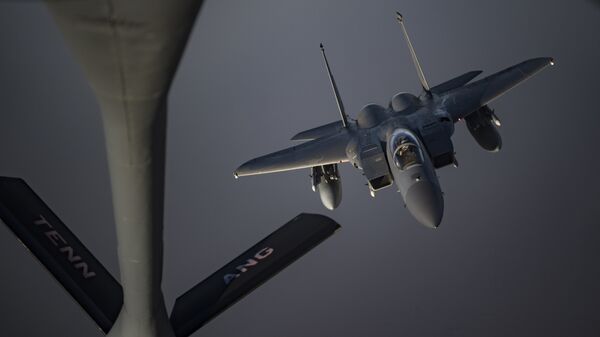 An Airman piloting an F-15C Eagle prepares to receive fuel from a KC-135 Stratotanker from the 28th Expeditionary Aerial Refueling Squadron, May 12, 2019, at an undisclosed location. The 28th EARS maintains constant presence in the U.S. Air Forces Central Command area of responsibility, supporting U.S. and Coalition aircraft in various operations conducted in Iraq, Syria, and Afghanistan.
© Senior Airman Keifer Bowes 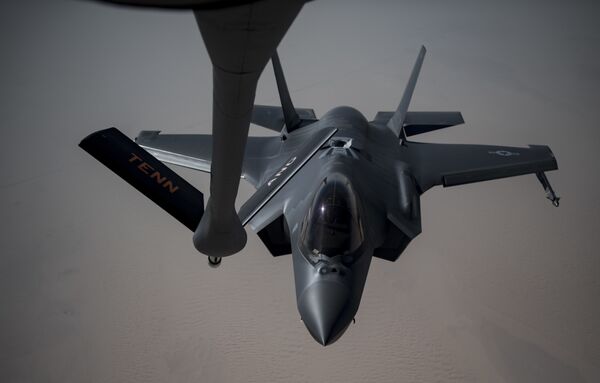 The USS Abraham Lincoln arrived in the region late last week with a US Navy strike force, and the USS Arlington, an amphibious transport dock full of MIM-104 Patriot surface-to-air missile systems, is on its way as well, Sputnik reported.

Tensions are extremely high in the region, where the prospect of a war between the US and Iran hangs in the air. Washington has alleged Iran has targeted US forces in Syria and Iraq and is responsible for hundreds of deaths of US servicemembers. Last month, the US designated Iran's Revolutionary Guard Corps (IRGC) a terrorist organization.

Tehran has said the US is trying to pressure Iran into negotiating an unfavorable agreement after the US pulled out of the 2015 Joint Comprehensive Plan of Action (JCPOA) last May. Washington has reimposed strangling sanctions on the Iranian economy since then.

"Any negotiation under the circumstances is surrendering to America, and it will never happen," General Qasem Soleimani, chief commander of the IRGC Quds Force, told the Fars News Agency last month.

Rear Admiral Hossein Khanzadi, who heads Iran's naval forces, told the Iran Students' News Agency, "The presence of the Americans in the Persian Gulf has reached its end, and they must leave."

On Sunday, several oil tankers in the Persian Gulf were "sabotaged," according to the Foreign Ministry of the United Arab Emirates, in whose waters the event occurred. Two ships flew under Riyadh's flag, while another ship was Emirati and the fourth vessel was Norwegian, Sputnik reported. There were no injuries or fatalities reported.

The four ships were near the Emirati port of Fujairah, the country's only major port on the Arabian Sea. Tehran has threatened to close the Strait of Hormuz in the event of war, instantly cutting off one-fifth of the world's seaborne oil trade.