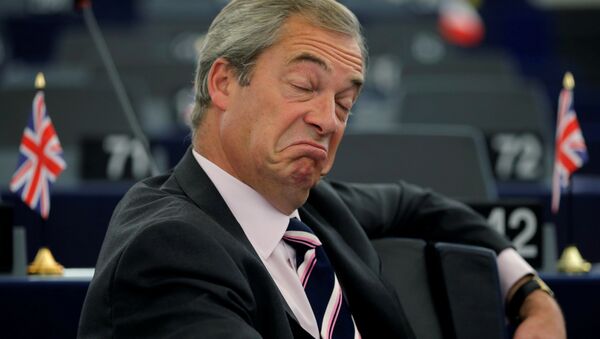 The findings of the latest poll are likely to encourage anxiety among the rank and file of the parliamentary Conservative Party, who already fear haemorrhaging supporters to Nigel Farage’s new and unapologetically pro-Brexit movement.

Nigel Farage's Brexit Party would be able to secure more votes in a general election than the governing Conservative Party, a new poll has concluded.

According to a ComRes survey carried out for the Sunday Telegraph, Mr Farage would scoop up almost 50 seats in the House of Commons, and would receive 20% of the overall vote.

If correct, the poll's numbers suggest that in the event of a general election, Theresa May's Tories would receive unprecedentedly low support, numbering at around 19%.

'Seismic Shock': Conversative Party Vet Widdecombe Joins Farage's Brexit Party
While the Brexit Party has been touted as likely to garner major support from the British public in the upcoming May 23 European Parliamentary elections, this is the first time that data suggests the newcomer could perform with major success in a general election.

Andrew Hawkins, the Executive Chairman at ComRes, is quoted as saying that, "this is a disaster for the Conservative Party. Worse still, it was entirely foreseen."

"The longer Theresa May is in denial about the danger her party faces, the harder it will be to recover lost voters — and the more likely the Brexit Party will succeed in its aim of getting a foothold in Westminster. If the Conservative leadership contenders are not careful, there will be no party for them to lead," he added.

The Brexit Party is the most popular political party among 'C2' skilled workers but trailing Labour among the unskilled (ComRes).

While the poll found that the Brexit Party would hammer the Conservatives, it forecasted that Jeremy Corbyn's Labour Party would win a general election, taking about 27% of the vote. However, such a percentage would still fail to secure the 326 seats needed to win an outright majority. Labour would, according to the poll, secure around 316 seats, while the Conservatives would sit at 179 and the Brexit Party would snatch up 49.

Former UKIP leader Farage formed the Brexit Party in January 2019 in response to what many Brits felt, and still feel, is the lack of serious progress made in Brexit negotiations by Theresa May's Conservative Party. The Brexit Party presents itself as an alternative to the mainstream parties, including Jeremy Corbyn's Labour, who have expressed on-again off-again support for a second referendum on the UK's departure from the EU, angering many. Moreover, unlike the Conservatives and Labour, the Brexit Party is the only one to have has embraced leaving the EU without a withdrawal agreement as official party policy.

The news of Farage's possible victory in a general election emerges at a time of anxiety within the major UK parties that they may lose high volumes of voters in the upcoming EU parliamentary elections to emerging parties like Change UK, the Brexit Party and even Independent candidate Tommy Robinson.

In fact, in another recent poll, the Observer found that in the upcoming European Parliamentary elections, the Conservatives are set to slump to fourth place, only managing to claw a third of the votes that the Brexit Party is projected to win. Farage is expected to capture 34% of the votes, Labour 21%, the Liberal Democrats 12% and the Conservatives 11%.

This is only the start.
The Brexit Party needs to win an overall majority to drain the Westminster swamp.
We Brexiteers need to actively promote it.
Encourage everybody you know and meet to read Breitbart, Politicalite and Infowars.
https://t.co/ps2eKAAL4o via @Telegraph