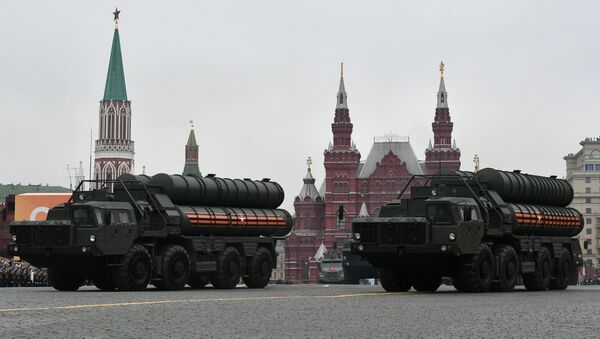 After failing to bully Turkey into backing out of a Russian air-defence deal, the United States has embarked on an attempt to discourage another country from buying Russian missile defence systems.

If India went ahead with the purchase, it could face sanctions from the US under a 2017 federal law that targeted Russia (as well as North Korea and Iran) with sanctions and prohibited any other nation from negotiating defence deals with these countries. Moscow has slammed the law as a declaration of "all-out trade war".

Washington is understood to have pledged to grant a sanctions waiver to India last September despite its plans to buy the S-400s; however, the waiver expired in early May.

It comes after an official with the US Department of Defence said in March that the US was working on an "alternative choice" for India.

The S-400 is touted as one the most advanced air defence missile systems in the world, capable of firing three different types of missiles at a short-to-extremely-long range. The missiles can tackle a variety of targets, including aircraft jammers, reconnaissance aircraft, cruise missiles and short-range ballistic missiles.

New Delhi agreed to purchase the systems last October, via a deal worth $5.43 billion (the contract has been signed in Russian roubles). The deliveries are expected to proceed between October 2020 and April 2023.

The upcoming purchase has unnerved Pakistan, India's long-time regional rival and a US ally, which voiced concerns that it could threaten strategic stability in the region.

India is not the first country looking forward to acquiring the S-400s. A similar move by Turkey has resulted in a long-running feud between Washington and Ankara.

For over a year now, Washington has been trying to convince its NATO ally, Turkey, to abandon a $2.5 billion S-400 deal, threatening to suspend the delivery of F-35 fighter jets, despite the fact that Ankara has already paid for several of them. The United States is afraid that incorporating the Russian system into NATO's wider air defence system would expose the top jets to security risks.

Ankara has repeatedly shrugged off US threats and reaffirmed its stance on sticking to the deal. "When Turkey signs an agreement, Turkey keeps its promise. We signed this agreement and certain payments were made. I don't think the arguments and concerns here have a lot to lean on," Turkey's vice president said last week.