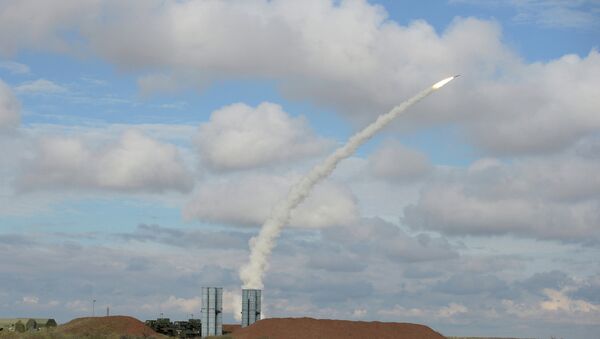 © Sputnik / Mihail Mokrushin
/
Go to the mediabank
Subscribe
International
India
Africa
The US is known to have purchased at least one S-300 devoid of its electronics in the 1990s, with an American and Israeli military delegation reportedly sent to Ukraine last year to get acquainted with an upgraded version of the air defence system after Russia sent S-300s to Syria.

A military blogger has posted a satellite photo of what he believes is an S-300 system operating at a test range "somewhere in the USA."

The photo includes several of the system's components, including 5P85PT launchers mounted on semi-trailers and its 30N6 fire control system.

The blogger, who focuses on analysis of satellite data using Google Earth on his Twitter page, did not specify the system's location, with no further information known about whether it was operational or merely a mockup. He deleted the original post after it started to be picked up by Russian media.

US Spy Plane Reportedly Spotted Over Venezuela as Maduro Warns of Risk of War
The mysterious satellite image sparking a flurry of interest among Russian-speaking social media users and in the media, with at least one outlet speculating that the system could be part of the US training for a military operation against Venezuela, which has at least two battalions of S-300VMS – an upgraded version of the system, guarding its military installation and government facilities.

In addition to Venezuela, the S-300 has been operated by US NATO allies including Bulgaria, Slovakia and Greece. The United States secretly bought at least one S-300 complex from Belarus in 1994 with its electronics and radar equipment removed, with speculation that the missing components were later picked up in Kazakhstan.

The S-300 was introduced into the Soviet military in 1978, and delivered to over a dozen countries in various modifications since then. Russia began upgrading its mobile air defences in the 2000s, with the military adopting the first of its S-400s in 2007. Russia still has about 2,000 S-300 launchers of all modifications, gradually upgrading them to include improved electronics, better radar, and longer range.