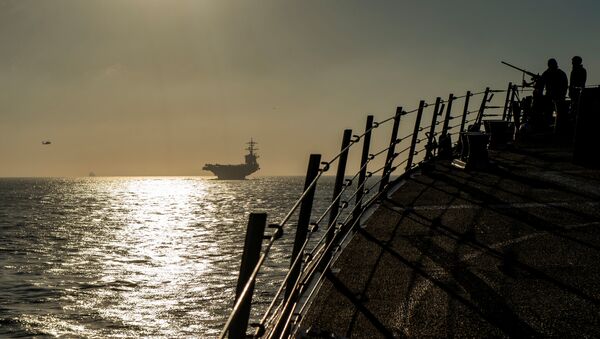 © REUTERS / Courtesy Jason Waite/U.S. Navy
Subscribe
International
India
Africa
Washington's efforts to exert pressure on Iran have so far resulted in the country partially curbing its commitments to the 2015 nuclear deal and vowing not to back down before US sabre-rattling.

Iranian President Hassan Rouhani said his nation is facing an "all-out war" due to an array of US economic and political pressures, the likes of which Iran has not seen in decades.

In a speech in Tehran on Saturday, Rouhani called for unity and cohesiveness at a time of unprecedented pressure on the country, according to PressTV.

Rouhani said that the sweeping US sanctions, which targeted Iran's banking sector, international trade, and crucial oil exports, were even more stringent than those the country experienced during the eight-year war with Iraq, which followed the Islamic Revolution of 1979.

"At the time of the war, we had no problem in banking, the sale of oil and export and import and the only ban imposed on us was the arms embargo," he said.

"Giving in is not consistent with our culture and religion and people won't accept it, thus we should not accept submission and we should try to find a solution."

US Secretary of State Mike Pompeo on Saturday said Iran was an active threat to American interests in the Middle East. "Iran is the major destabilising influence in the Middle East, and we aim to fix that," he stated.

Meanwhile, the US military has deployed a carrier strike group and a bomber task force near Iran, also ordering the deployment of a warship and more missile defence systems to the Middle East.

The Trump administration claimed the move came in response to intelligence data indicating a growing threat from Iran and its proxies.

Tehran dismissed the increased US military presence in the region as "psychological warfare" and said the US "will not dare" to take military action.

On Wednesday, Tehran announced that it was scaling back on several commitments within the 2015 nuclear deal, bruised by the US withdrawal last year.

Iran informed the remaining signatories — Russia, China, Germany, France and the UK — that it would stop selling its surplus stocks of enriched uranium and heavy water, which are used in nuclear reactors that may produce nuclear bombs.

Rouhani, in a televised address on Wednesday, also gave the signatory states 60 days to shield Iran's banking and oil sectors from the sanctions' effects, threatening to start exceeding the uranium enrichment cap if they fail to do so.

The European powers in response reaffirmed their commitment to the deal and expressed regret about the re-instated US sanctions, but said they "reject any ultimatums".