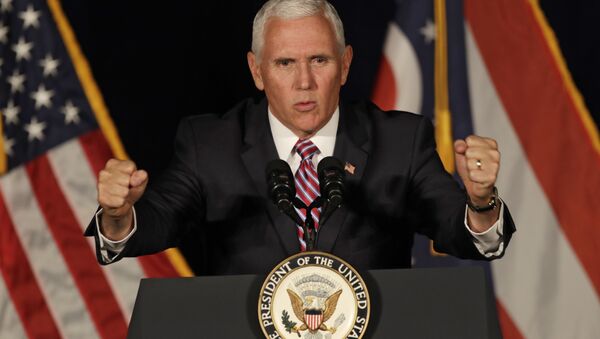 © AP Photo / Tony Dejak
Subscribe
International
India
Africa
Describing the kind of perils they might find themselves facing due to their faith, Pence told students that Donald Trump will continue to defend freedom of religion.

During his recent speech at Liberty University, a private evangelical university located in Lynchburg, Virginia, US Vice President Mike Pence warned graduates that they should prepare to endure criticism from those he described as the “secular left”.

"Some of the loudest voices for tolerance today have little tolerance for traditional Christian beliefs. So as you go about your daily life, just be ready", Pence said.

He also lamented that while "throughout most of American history, it’s been pretty easy to call yourself a Christian" and "it didn’t even occur to people that you might be shunned or ridiculed for defending the teachings of the Bible", today students will asked to "bow down to the idols of the popular culture".

Viral
GoT Producer Reveals How 'Mike Pence' Was Used in the Battle of Winterfell
Pence urged students to remain firm in their convictions and promised that President Donald Trump will ever remain a defender of freedom of religion.

"We will always stand up for the right of Americans to live, to learn, and to worship God according to the dictates of their conscience. As President Trump said at this very podium two years ago, on our watch, ‘No one is ever going to stop you from practicing your faith or from preaching what is in your heart.’ That’s a promise", he said.

Having once reportedly described himself as "a Christian, a conservative and a Republican, in that order", Mike Pence became an evangelical born-again Christian during his college years.