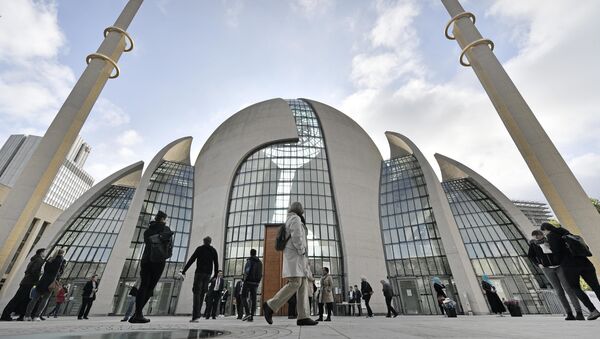 © AP Photo / Martin Meissner
Subscribe
International
India
Africa
A recent survey conducted in Germany reportedly revealed that some of the country’s states affirmed that local mosque communities should be able to finance themselves.

The German federal government may consider implementing a so-called “mosque tax” in order to deal with the country’s Muslim institutions’ dependency on funding from abroad, the local Welt am Sonntag newspaper reports.

According to the newspaper, Berlin regards this measure as “a possible path”, with several of Germany’s states already expressing their support in principle to implement the new tax which would mirror the already-existing “church tax”.

READ MORE: Germans Up in Arms Over Merkel Ally's Remarks About a Muslim Chancellor in 2030

The prospects of this new fiscal measure were brought forward amid concerns about the possibility of foreign funding sources being used to exert influence over mosques and, by extension, the country’s vast Muslim population.

Islamist Attacks Have Claimed 146K Lives Since 9/11, German Media Says
For example, 900 of the country’s mosques are being run by the Turkish-Islamic Union of the Institute for Religion (Ditib), whose imams get paid by Ankara.

Some mosques have also come under government scrutiny or even been closed for “preaching radical and militant Islamist ideas”.

While the newspaper also added, citing its own survey, that several states affirmed that “mosque communities in Germany should be able to finance themselves”, the interior ministry for Mecklenburg-Western Pomerania said it was open to "mosque financing based on the church model" to curb foreign influence along with "the danger of possible radicalisation".

A Baden-Wuerttemberg state interior ministry spokesman also warned of the threat of foreign influence "on theological content and political opinion", which, in the worst-case scenario, might include "radical Islamist or anti-democratic content or aspirations".