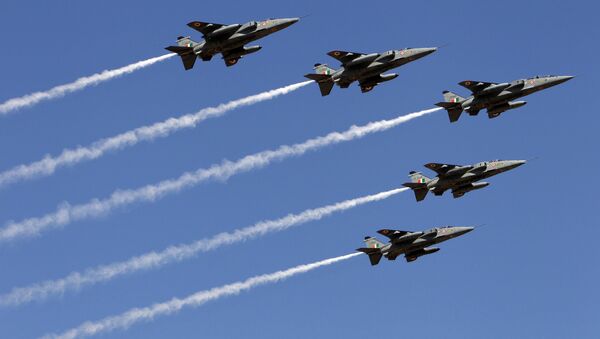 Indian warplanes crossed into Pakistani airspace in February to conduct airstrikes against apparent infrastructure of the militant group which claimed responsibility for the killing of dozens of Indian soldiers, with tensions soon spiralling into skirmishes, small arms fire and artillery barrages along the sensitive Line of Control in Kashmir.

Indian Prime Minister Narendra Modi's latest remarks about the Balakot airstrikes sparked furor online after he indicated that he personally authorised the attack in spite of bad weather conditions because he thought "the clouds could actually help our planes escape the radars" and "provide us much needed cover."

Speaking to India's News Nation TV channel on Saturday, Modi said heavy rain on the night of 25 February had complicated planning for the 26 February strikes, even prompting military planners to consider rescheduling the operation. He added, however, that he had to use his non-expert "raw vision" about using the clouds to India's advantage to dispel defence experts' doubts and push forward with the attack.

"At around 1:30 am, we started the movement, at 2:55 we okayed it and at 3:20 am I got the report about the airstrikes. There was so much movement in air and water that it confused Pakistan," the prime minister claimed.

Divya Spandana, social media director for India's main opposition party, the Congress Party, mocked Modi, tweeting that the ability to use radar to detect planes, "cloud or no cloud," has been around for decades.

FYI @narendramodi the radar to detect planes,cloud or no cloud has been there for decades. Even for the stealth ones. If not, other country’s planes would be crisscrossing the skies firing away at will 🙄
This is what happens when you’re stuck in the past. Get with it Uncle ji. https://t.co/sKYTAmz6jz

Modi's remarks did not go over well among other detractors either. Some users, including the prime minister's other opponents in India's ongoing elections, suggested that his evident lack of knowledge about how radar technology works is a serious national security risk.

National security is not something to be trifled with. Such an irresponsible statement from Modi is highly damaging. Somebody like this can’t remain India’s PM. https://t.co/wK992b1kuJ

Since Modiji has revealed that he overruled the advice of IAF top brass to reschedule the Balakot air strike bcs of cloud cover, questioning Balakot strike is no longer about the IAF but about Modi’s lack of judgment & inability of cabinet ministers & his aides to dissuade him.

Others couldn't help but chuckle, sarcastically quipping that their "cloud scientist" PM's remarks were an "important piece of tactical information that will be critical when planning future air strikes," or suggesting that Modi may have been "high."

Someone please tell him that radar is different from binoculars. Let’s wait till 23 May, Modi won’t be able to see BJP’s majority either with binoculars or with microscope. He would then need a radar to figure out where to escape from Delhi. #DeshKeDilMeiModi #Phase6 pic.twitter.com/7YMWE2q5Hj

"It's better to keep your mouth shut and appear stupid than open it and remove all doubt." — Mark Twain#EntireCloudCover pic.twitter.com/oVCDDlmDUP

How Radar works according to Modi. pic.twitter.com/iDMjDcisyU

Actual photo of Pakistani radar on the day of the Balakot strike. #WahModiJiWah #EntireCloudCover pic.twitter.com/QkcpcvctvC

Mirza Cloudy Alias Scientist Modi should be nominated for this year’s Nobel Prize for Physics for developing a new theory on radar-cloud relationship. All bhakt friends please support this campaign #PhysicsNobelPrizeForModi pic.twitter.com/2Tc9rIrweP

Some flipped the remarks around to make jokes about the Indian Space Research Organisation's space missions, joking that Modi had intervened personally to encourage scientists to attempt a moon landing on Full Moon Day "because then they will have more area to land on."

"ISRO wasn't ready for the moon mission. The experts had their doubts. I told them to attempt it on the Full Moon Day because then they will have more area to land on. Vidya kasam." — Our scientist PM

Others mocked Modi by suggesting that Vijay Mallya, the fugitive Indian businessman who fled India earlier this year over a multi-billion-dollar bank default case, may have taken a tip from the prime minister and used clouds to make his escape.

"Sir how will you get out of India undetected?"
Vijay Mallya:…. pic.twitter.com/O4Q8vqF9n8

Eventually, users came up with the #EntireCloudCover hashtag, which instantly became popular on the Indian segment of Twitter.

A day later, India carried out a second strike, with Pakistani jets scrambled to intercept the warplanes, sparking a dog fight in which at least one Indian MiG-21 was shot down, with India claiming a Pakistani F-16 was also destroyed. The terror attack, India's response and the ensuing dogfight sparked a series of clashes along the sensitive Line of Control border area which continue to this day. Modi and the ruling Bharatiya Janata Party (BJP) have used the strikes and the ongoing tensions during India's ongoing elections to portray the prime minister as a tough leader who bravely defended the country.