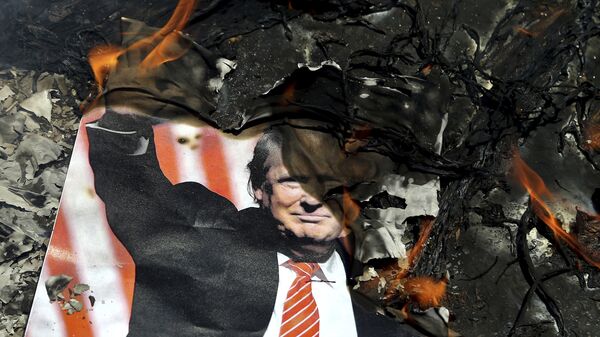 © AP Photo / Ebrahim Noroozi
Subscribe
International
India
Africa
On Saturday, the White House reportedly gave Swiss authorities a phone number which Iranian leaders can use to reach President Donald Trump, who earlier urged Tehran to call him amid deteriorating ties between the US and Iran.

Iranian Deputy Foreign Minister Abbas Araghchi has played down the importance of Washington allegedly sharing a phone number for Tehran to get in touch with US President Donald Trump.

“In order to exit the difficult situation that Trump has created for himself and the US, there is no need for mediation and phone number. Washington has to revise its policy and behaviour”, Araghchi told the Iranian YLC news outlet.

When asked about what the Iranian Foreign Ministry will do with Trump's alleged phone number, Araghchi said that “if required, they have our number”.

Separately, he said the international community admits the White House’s “wrong policies” and its “mistake” to pull out of the Iran nuclear deal and intensify pressure on Iran.

Araghchi spoke after CNN cited an unnamed diplomatic source as saying on Saturday that the White House provided authorities from Switzerland with a phone number to reach President Trump.

The Swiss embassy in Tehran represents US interests in the Islamic Republic as the two countries severed relations after the 1980 Iran revolution.

Earlier, Trump urged Iranian leaders to phone him up to discuss matters related to possible negotiations between the two sides aimed at resolving the ongoing bilateral tensions.

Yadollah Javani, deputy commander of Iran's Revolutionary Guard Corps (IRGC) said in turn that Iran had no plans to talk to the US which he claimed is an “unreliable” negotiating partner.

Javani was echoed by Iranian Foreign Ministry spokesman Bahram Qassemi who flatly rejected Trump's claims that Tehran had sought talks with Washington, saying that the US president was only voicing to his "false and unattainable dreams".

US Sends More Warships, Patriot Missiles to Mideast Amid Escalation With Iran
The developments come amid increasing tensions between Iran and the US which escalated on Wednesday, when Tehran announced that it would backtrack on some of its "voluntary" commitments under the Joint Comprehensive Plan of Action (JCPOA), also known as the 2015 Iran nuclear deal.