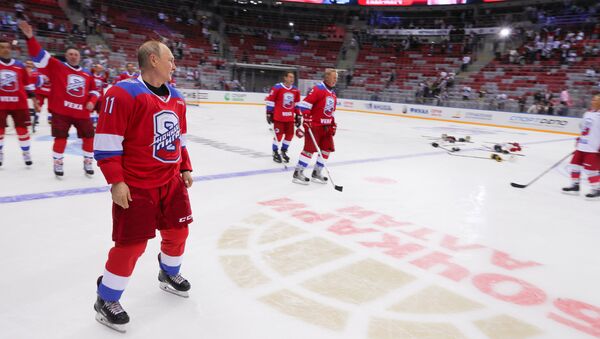 © Sputnik / Михаил Климентьев
/
Go to the mediabank
Subscribe
International
India
Africa
On Friday, the Russian president took part in a gala match in Sochi promoting the Night Hockey League, an amateur league featuring former pros and other prominent figures which he founded in 2011 in an effort to promote sport across the county.

Footage of Vladimir Putin's fall during last night's game immediately went viral among virtually all major print and online media outlets in the US, the UK and Canada, with everyone from the highbrow New York Times and The Guardian to the lowbrow British tabloid media and even TMZ coming up with an endless series of flippant jokes about Putin's "humiliating" "faceplant" at the close of the match.

Putin, incidentally, who only took up hockey before his 60th birthday, quickly picked himself up off the mat he accidentally tripped on and continued skating, tapping the glass along the boards, smiling and waving. The 66-year-old scored eight goals during the match, helping lead his team to a 14-7 victory.

The Western media's facetiousness about the incident didn't go unnoticed among readers, with social media users on both sides of the Atlantic bashing the coverage and cracking jokes of their own at the outlets' expense.

The little joys of the british “journalists”.

Right up there with Justin's boxing match, or run by the lake, or prom selfie, or India dress up, or… well you get the picture.

So what!? You never fell before? On ice even?

More propaganda for Americans' public opinion. Whatever happened to Glasnost?

This is not news. Come on.

Of course, the haters came out in force as well, cracking 'in Soviet Russia' jokes, mocking Putin's skating skills, or saying they were now worried about the fate of the carpet he tripped on.

Is that what is meant by the “fall of communism “

In Russia, the carpet skates you…

he looked ahead then fell on the carpet.
He's a great skater blyat! pic.twitter.com/XUyAV60WzQ

Only a few users seemed able to find anything resembling a balanced middle ground.

No, this is not news.
Yes, it is a cheap shot.
Yes, I still enjoyed it.