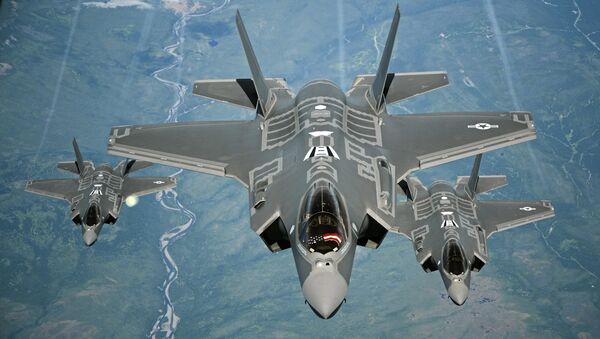 The September 2018 crash of a US Marine Corps F-35B in South Carolina was caused by a manufacturing defect in a fuel tube manufactured by a United Technologies subcontractor, according to an official government report.

According to a Government Accounting Office (GAO) report to congressional committees this week, "an investigation determined a manufacturing defect caused an engine fuel tube to rupture during flight, resulting in a loss of power to the engine."

"The program office reported that it identified 117 aircraft with the same type of fuel tubes that it must replace," the report adds.

The report identified "quality control and late radar deliveries as the top production risks in the program," noting that the contractor is collaborating with the supplier to resolve the issue "through improved production processes as the program approaches its full-rate production decision in October 2019."

The pilot ejected safely and remains in stable condition, according to reports, and the crash caused no casualties.

In August 2018, the nonprofit Project On Government Oversight (POGO) reported that senior officials developing the F-35 Joint Strike Fighter for the US armed forces were hiding dangerous flaws in the overdue and over-budget plane instead of fixing them.

According to a document obtained by POGO, F-35 officials re-categorized major design flaws instead of fixing them in order to claim that the program had completed its development phase.

"Several of these flaws, like the lack of any means for a pilot to confirm a weapon's target data before firing, and damage to the plane caused by the tailhook on the Air Force's variant, have potentially serious implications for safety and combat effectiveness," the report stated.

According to a Pentagon assessment released in January, the F-35 program has multiple vulnerabilities that have not been remedied and improvements "are still not translating into improved availability," Sputnik previously reported.

The F-35B fighter jets, one of three F-35 variants, have issues with Autonomic Logistics Information System (ALIS), a computerized maintenance tool, which transmits "aircraft health and maintenance action information to the appropriate users," according to the American aerospace and defense company Lockheed Martin.

In addition, the jets have "unacceptable" accuracy problems in weapons systems used in air-to-ground attacks, the report states. Other issues with the F-35B jets include tires that wear out too quickly, refueling probes that break off in mid-flight and life support systems that do not provide adequate oxygen to pilots while inflight.