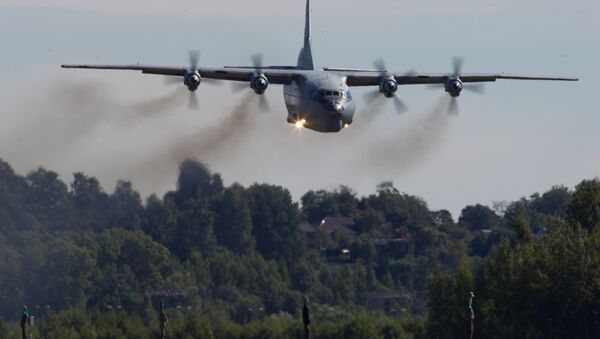 © Sputnik / Igor Russak
/
Go to the mediabank
Subscribe
International
India
Africa
NEW DELHI (Sputnik) – The Ukrainian heavy cargo plane, which was intercepted by the Indian Air Force, was allowed to continue its flight to New Delhi, the Press Trust of India news agency reported on Saturday.

According to the Press Trust of India news agency, the pilots’ questioning and examination of the aircraft lasted for several hours. As nothing suspicious had been found, the plane was reportedly allowed to continue the flight.

It still remains unknown why the An-12 has changed the flight path.

Asia
India Joins First-Ever Joint Naval Drill in Contested South China Sea
On Friday, the An-12 heavy cargo plane was forced by the Indian Air Force to land in the northwestern city of Jaipur over violation of the country’s airspace by entering at an unscheduled point in the west via Pakistan. According to first reports, the An-12, which was heading from Tbilisi to New Delhi via Karachi, was Georgian aircraft but later the Georgian Civil Aviation Agency said that the intercepted plane belonged to Ukraine.

The situation on the Indian-Pakistani border has traditionally been tense over competing claims to parts of the Kashmir region. Tensions in the region escalated in February when the Indian Air Force carried out an airstrike against what it claimed to be a camp belonging to the Jaish-e-Mohammed terrorist group, located on the Pakistani side of Kashmir, in retaliation for an attack on an Indian paramilitary convoy earlier that month.