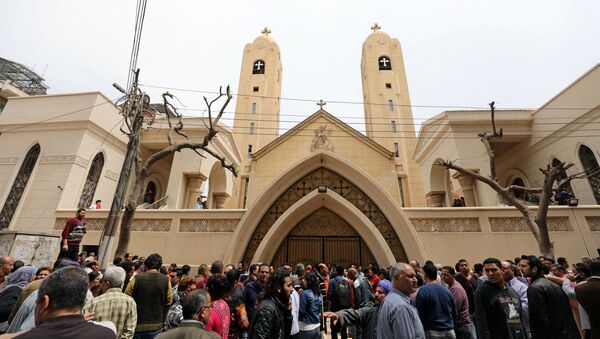 © REUTERS / Mohamed Abd El Ghany
Subscribe
This comes after a group of Coptic worshippers in Upper Egypt launched an online campaign last week to call on fellow young women to dress modestly when in churches.

Comments by a Coptic priest that women should cover up in church have sparked a wide public uproar among Egyptian Christians, believed to be the largest religious minority in the Middle East.

“Why are girls and women even coming to church if they're wearing revealing and inappropriate clothes?” Father Daoud Lamei, parish priest of St Mark’s Church in Heliopolis, Cairo, said during a sermon to mark Orthodox Easter.

He noted that he “personally thinks” that “any man, who agrees to his wife leaving her home in that way, will be judged before God”.

“At least during Christmas we don't have to worry about racy clothes because it's cold […]. We want it to be cold always”, Lamei added.

Some were quick to condemn the priest for his remarks, while others praised Lamei for speaking with “complete respect” so that the women can “wake up and revere the church they're entering”.

Elizabeth Monier, an expert on Coptic affairs at the University of Cambridge, in turn, called Coptic clergy “role models” for the Coptic community who see them as the "guardians of its traditions and its faith”.

“This is strongly the case when a community feels that it is under threat”, she said.

Coptic Christians make up about 12 per cent of Egypt’s 100-million person population, which is predominantly Sunni Muslim.