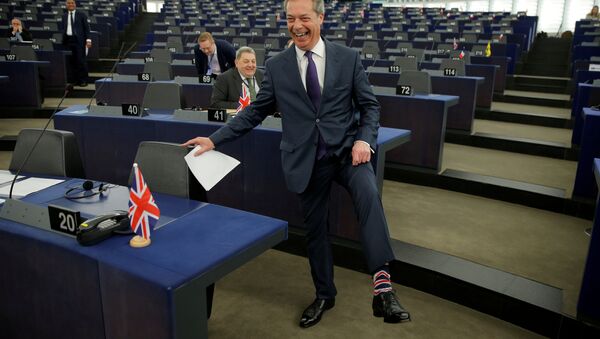 Jon Gaunt
All materials
“Bollocks to Brexit” shout the Lib Dem’s on their EU manifesto in a deluded attempt to be down with the kids and get the ‘yoof’ vote.

They believe that the fact they got more votes than expected in the local elections last week means that there is an upsurge in support for them and against leaving the EU?

Just how dim are they?

They benefited, as per usual, from the protest vote and the fact that UKIP is in disarray and didn't stand in many areas. However, and most importantly they benefitted because of the fact the Nigel Farage's Brexit party was only formed four weeks ago.

Never mind the bollocks (sorry I couldn't resist that one) the situation is more akin to the Sex Pistols' first single Anarchy in the UK.

Just who is in charge of the country? It certainly isn't Theresa the Appeaser or her cabinet and whilst our English football teams have been brilliant this week, Corbyn has failed to score in front of so many open goals recently that any hopes he had of flying the red flag over number 10 are surely finished forever?

READ MORE: Farage Could End Up in Number 10

Comrade Corbyn's and Theresa May's last-ditch attempt to stitch together some sort of shoddy deal or compromise has failed to materialise and whilst they wasted even more precious time with their pantomime, thank god Nigel Farage was organising his new Brexit Party.

May and Corbyn only galvanised themselves when the local elections sent a clear message, which was then backed up by numerous polls, that Farage was and is going to have a landslide of a victory in a fortnights time.

These two were willing to tear up all their red lines, even destroy their own parties to try and stop Farage. But they failed and failed miserably. Let's hope these two never get asked to run a booze up in a brewery!

No wonder Nigel was laughing on Question Time last night when he said, "As Leader of The Brexit Party, I want Theresa May to stay in office for as long as possible. She is doing a fantastic job of recruiting for us."

Confident Farage Mocks Theresa May Despite Past of Duplicitous Brexit Vows
Meanwhile, the architect of this mess Cowardly David Cameron has allegedly just installed an eighth grand hot tub in his holiday mansion. He might be luxuriating in his hot water after running away after he promised "I am absolutely clear, a referendum is a referendum, it's a once in a generation, once in a lifetime opportunity and the result determines the outcome… You can't have neverendums, you have referendums."

Cowardly Cameron is correct, a referendum was a once in a lifetime decision but this miserable shower in Westminster have failed, deliberately, in my opinion, to carry out the will of the people. The majority of politicians have been muddying the water in the fetid swamp that is Westminster. People are getting angry and who can blame them?

It is not just me who can think of thousands of ways we could spend the 109 Million it is going to cost to hold EU elections in two weeks for an institution we should have left three years ago?

How about more cops, more nurses, more Doctors, cancer treatment, homes for our veterans, the list goes on and on but no, the self-servers of Westminster are being forced to hold elections because of their sheer incompetence, lies and for putting their naked self-interest over the wishes of the people in this country.

Despite three years of debate and the votes of 17.4 million people and despite the two main parties stating in their last political manifestos that they would carry out the wishes of the people, we are still in the EU.

Add on to this list of shame the fact that the majority of the self-serving pigs who infest the House of Commons voted for Article 50 and the principle of leaving on WTO terms if the deal was not finalised by March 29, 2019.

A cynic, in fact, anyone, would conclude that the Establishment and political elite never really wanted us to leave or had no intention of us ever leaving.

Paris Opposes 'Repeated Extensions' of Brexit - Presidency
No wonder we saw EU negotiators effing and blinding about May's negotiation skills and calling her insane on TV this week.

Now MP's have just given themselves another holiday from May 24 to June 3. Andrea Leadsome called it the Whitsun recess? The what? Have you or I ever had one of these? They have only just come back to the trough from their 11-day Easter break and still, Brexit remains undone.

Of course, this next holiday means they will not be in Westminster when the results from the EU election come in, there's a surprise NOT!

And then people say I am rude to call them self-serving pigs? They have got a job to do so why don't they bloody well get on with it?

Of course, all of this is playing right into Nigel Farage's hands and means he will clean up but will it make a blind bit of difference to us getting out of the EU? I doubt it.

I think they will delay, dither and dissemble when they eventually return to the swamp and play for time to their next big holiday break between July 26 and October 7 (That is not a typo but a fact. They are having tons more holidays, well they do work so hard don't they?)

Of course, what is really behind this delay now and the reason why the most useless PM in history is not yet toasted is that none of this shower wants a General Election because they know that The Brexit Party would do remarkably well and a lot of this swamp would be drained. It is almost impossible to understand how a party that was only formed 4 weeks ago has it got itself into this position until you look back and realise the scale of the betrayal.

But still, they don't get it, do they? Still, they fiddle their expenses and have their credit cards taken off them, they still live in a parallel universe to the rest of us and as the Sex Pistols sang they still have "Holidays (lots of them) in the sun".

The establishment and the MSM always slag off Nigel and his seven attempts to get elected as an MP. However, when the General election inevitably happens after the EU results, Nigel Farage and the Betrayed Brits he represents will wipe that smug, self-satisfied smirk off their faces forever.