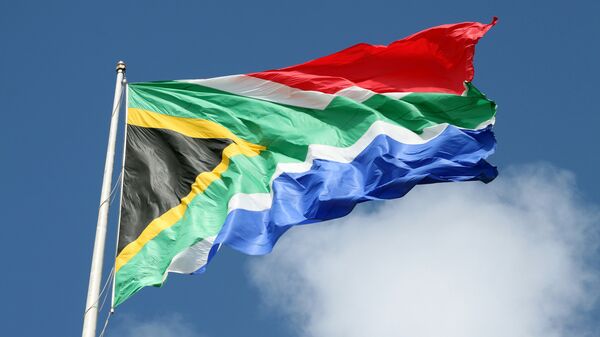 A recent general election in South Africa reveals rising voter frustration with partisan politics, and the policies of the ruling African National Congress (ANC), which is still poised to keep its majority despite the mounting economic challenges.

Kristian Rouz — South Africa's ruling party, the Africa National Congress (ANC), is set to maintain its majority in parliament after the 8 May election, according to preliminary results. The Rainbow Nation's voters appear to have given the party its last chance to tackle crippling unemployment, rife corruption, and disruptions in infrastructure after 25 years in power.

The majority of electoral districts have declared their results, according to which, the ANC received roughly 58 percent of the vote; the opposition centre-right Democratic Alliance got 21 percent. The results reflect a gradual erosion of public confidence in the ANC since the previous election back in 2014, when the party received 62 percent of the vote.

The results also appear to reflect mounting public disenchantment with the ANC's policies, as over the last five years. The nation's debt has balanced on the edge of 'junk' according to its international credit ratings, massive power outages have resulted from alleged corruption in the national utility Eskom, and the country has failed to tackle unemployment, which averages about 30 percent.

While President Cyril Ramaphosa has vowed to eradicate corruption, his cabinet is facing mounting voter and investor scepticism. Officials are still planning to pursue the racially-targeted confiscation of agricultural land, and lack a clear plan to tackle elevated inflation and support faltering GDP growth.

"Younger voters with little memory of the apartheid era may rightly feel that the economic gains have mainly been reaped by a small group, often politically connected with the ruling ANC and be frustrated by a lack of job opportunities," Mark Bohlund of Bloomberg Economics wrote. "The combination of a rapidly growing labour force and a stagnant economy will remain one of the key challenges for the government."

'ANC Has Not Paid Sufficient Attention to Land Reforms for 20 Years' – Professor
According to government data, roughly 27.1 percent of South Africans are currently unemployed — a 2.8-percent increase since 2009. Meanwhile, the labour participation rate stands at 59.4 percent — roughly 3 percent below that of the US.

This suggests that a significant fraction of the Rainbow Nation's population remain out of work — explaining the crippling poverty and a rising popularity of left-wing ideas among the country's marginalised societal strata.

South Africa's GDP growth rate has slowed from roughly 3 percent per year back in 2011 to just below 1 percent last year. Meanwhile, investor and business confidence remain low, and the nation's debt-to-GDP ratio has approached 60 percent recently, up from 28 percent back in 2008.

Electoral results show that popular frustration with the poor economy has also expressed itself in terms of voter turnout, which dropped from 73 percent in 2014 to about 65 percent this year. Many South Africans don't believe the government is able to fix the ever-deteriorating economic situation.

"I'm a member of the ANC, but I didn't vote for them this time," construction worker Thabo Makhene said, as quoted by Reuters. "They need to catch a wake-up. The way they run the state, mishandling state funds, they've lost their morals."

South Africa's Economy Faces Murky Outlook Ahead of General Elections
However, the majority of voters remain loyal to the ANC as they believe the party ended apartheid and provided economic opportunity to the majority of the population. What appears to be a less-discussed topic is that South Africa was nearly bankrupt 25 years ago, with its gold and currency reserves near zero due to international sanctions and a boycott related to the then-ruling National Party's policy of apartheid.

The removal of sanctions gave South Africa an economic boost that lasted from mid-1990s until 2008, but more recently, corruption, nepotism, and mismanagement took their toll on the nation's economy.

"We have made mistakes but we have been sorry about those mistakes and we are saying our people should reinvest their confidence in us," President Ramaphosa said. "Corruption got into the way, patronage got into the way and not focusing on the needs of our people got in the way."

Despite the ANC promising a war on corruption, greater transparency at the highest levels of governance, and economic reforms, it remains unclear if the Rainbow Nation will avoid a recession and 'junk' credit ratings in the near future.