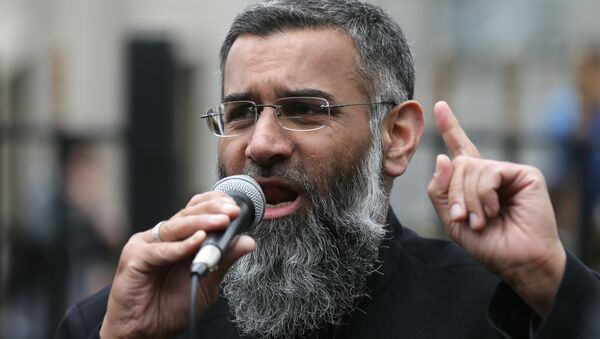 UK Home Secretary's recent statement to the Parliament on fighting extremism in the UK has been widely discussed on social media, with questions as to who or what constitutes hate speech in Sajid Javid's eyes.

Addressing the House of Commons this week, Javid told parliamentarians he has used his powers as Home Secretary eight times to ban hate preachers from the country.

"If you're coming to the UK to preach poison, think again. You're not welcome," Javid said on Twitter.

His pledge to crack down on both Islamist and far-right propagandists saw dynamic response online.

Users were quick to note that Javid's warning doesn't affect one of the most prominent Islamist hate preachers in the UK, Anjem Choudary.

In October 2018, Choudary, who was sentenced to five and a half years in prison for recruiting members of the Daesh* terrorist group, was released from Belmarsh Prison in the south of London. He has since been subject to a strict surveillance programme.

While some commentators hailed Javid's statement, calling him a "decisive leader" and the measure "massively overdue," others questioned whether his determination to crack down on hate speech includes such figures as Brexit Party leader Nigel Farage and US President Donald Trump's former strategist Steve Bannon.

Are you talking about Nigel Farage

Unless you're Steve Bannon, who advises some of leading politicians.

But Nigel Farage is OK?!

Please say what he's saying!! Trump too.. It's not going to happen 🙏🙏🙏 pic.twitter.com/UFCmLZ5cWM

The package of measures to provide extra security for places of worship in the UK was announced by Javid in the wake of terror attacks in New Zealand mosques and Sri Lanka churches.

The latest attack scare took in the UK took place in the late hours of Thursday evening, with reports of a man with a firearm entering a London mosque and firing a shot from a "blank-firing handgun."