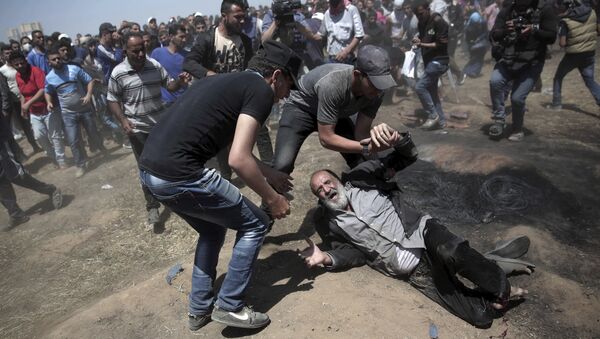 "A 24-year-old Palestinian died and 30 Palestinians were injured during clashes with the Israeli army on the eastern borders of the enclave," the spokeswoman said.

Earlier, it was reported that 14 Palestinians were injured during Friday's clashes.

US Dem Pres. Candidate Slams Israel as 'Racist Regime' Amid Gaza Escalation
The Gaza border area has been a scene of violent clashes between Palestinians and the Israeli military when the Palestinians launched their anti-Israeli campaign, dubbed the Great March of Return.

The scope of the protests has noticeably decreased in the last month due to the fact that the parties to the conflict have managed, with the mediation of Egypt and the UN, to agree on easing the blockade of the Gaza Strip and other measures of social and economic support.

READ MORE: US Media Portray Israelis as Victims in Latest Round of Gaza Strikes

The relations between Israel and Palestine have been shattered for decades. Palestinians seek diplomatic recognition for their independent state on the territories of the West Bank, including East Jerusalem, which is partially occupied by Israel, and the Gaza Strip.

The Israeli government refuses to recognise Palestine as an independent political and diplomatic entity, and builds settlements in the occupied areas, despite objections from the United Nations.