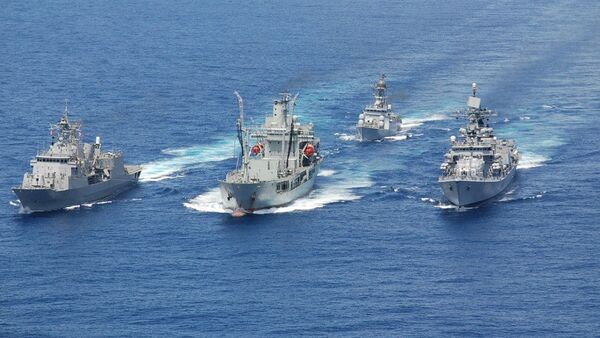 © Photo : Indian Navy
Subscribe
China weighed in on the incident in a strongly worded statement, saying that ‘policies and actions’ in the region by various state actors should be geared towards ‘maintaining’ the region’s peace and stability, instead of undermining them.

New Delhi (Sputnik) — India's naval forces joined those of the US, Japan and the Philippines to conclude their first-ever joint naval drill in the South China Sea on Thursday, prompting censure from China, which claims sovereignty over the resource-rich marine region.

The Indian Navy joined the exercise as part of its commitment to operate with like-minded nations to ensure a safe maritime environment through enhanced interoperability.

The week-long naval drill involved a Japanese aircraft carrier, a US destroyer, two Indian naval ships and a Philippine patrol vessel. The Indian ships that took part were the INS Kolkata and INS Shakti.

"The ships undertook various exercises en route, which included formation manoeuvring, replenishment runs, cross-deck flying and the exchange of Sea Riders.  The Group Sail exercise with the naval ships of Japan, the Philippines and the United States showcased India's commitment to operating with like-minded nations to ensure a safe maritime environment through enhanced interoperability," an Indian government press release read.

Philippines Warns Beijing Against 'Irritant' Acts in S China Sea
Reacting to the development, the Chinese foreign ministry said that the countries should not indulge in any action that undermines peace and stability in the region.

The joint naval drill comes days after the US guided-missile destroyers Preble and Chung Hoon trespassed in the adjacent territorial waters of Nanxun Jiao and Chigua Jiao, two of China's Nansha Islands, without permission from the Chinese government. The US action angered China, which said that the US move infringed upon its sovereignty.

China, in a strongly worded statement, had asked the US to cease such provocations.

"With the concerted efforts of China and ASEAN states, the situation in the South China Sea is steadily improving. China urges the US to stop such provocations, respect China's sovereignty and security interests and the regional countries' efforts to safeguard peace and stability in the South China Sea," Geng Shuang warned the US.

Disputed Drilling: Beijing Announces First South China Sea Deepwater LNG Site
Meanwhile, senior officials from China and Japan will be meeting in Otaru for the 11th round of high-level consultations on maritime affairs where the two sides will conduct a comprehensive dialogue on bilateral communication and coordination.

"In this round of consultations, China looks forward to a full exchange of views with the Japanese side on maritime issues of mutual concern to boost mutual understanding and trust," a statement from the Chinese foreign affairs ministry read.

China claims almost all of the strategic South China Sea, which is also bordered by Brunei, Indonesia, Malaysia, the Philippines, Taiwan and Vietnam, brushing aside all competing claims to the resource-rich marine region.