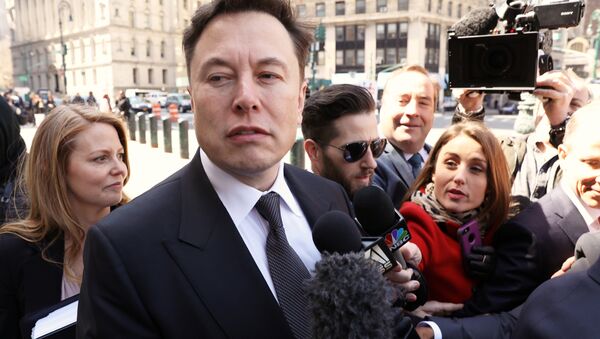 © REUTERS / Brendan McDermid
Subscribe
International
India
Africa
Back in 2018 SpaceX founder Elon Musk labelled Vernon Unsworth, a 63-year-old cave diver, a "pedo guy" on Twitter, after the latter called the billionaire's attempt to save 12 children stuck in Thai cave with a custom-design submarine a "PR stunt." At the time Unsworth pledged to start legal action against Musk.

Stephen Wilson also noted that Musk's statements to the BuzzFeed reporter were a key reason why Musk's defence of using hyperbole was insufficient in the court filings.

"There is nothing about the context in which the Defendant made the statements-in emails to a specific reporter-that would create doubt as to whether Defendant's statements implied assertions of objective fact," Wilson wrote. "Indeed, the Defendant made his statements to a member of the news media, whose job is to uncover and collect facts," judge added.

On 23 June, several hours after the 12 boys from the local football team and their coach entered the Tham Luang cave in Thailand's northern province of Chiang Rai, heavy rains prevented them from leaving.

Elon Musk offered his help in rescuing those who were trapped by using a "kid-sized" mini-submarine created by his rocket company, SpaceX.

Viral
Elon Musk Calls Thai Cave Rescuer ‘Pedo Guy’ in Twitter Meltdown
Unsworth, was the first foreigner on the scene and played a key role in getting all 13 people out of the cave safely, he reportedly said at the time, quoted by CNN, that Musk's proposal was "just a PR stunt" that "had absolutely no chance of working."

Musk called the diver a "pedo guy" on Twitter, yet later he deleted his tweets and apologized, however, he continued to criticize diver later saying that if the allegations were untrue, why didn't he sue.

After the incident in 2018 BuzzFeed News published a copy of the email in which Musk called Unsworth "a single white guy from England who's been travelling to or living in Thailand for 30 to 40 years," alleging that he had moved to Chiang Rai "for a child bride who was about 12 years old at the time," adding that the city was "renowned for child sex-trafficking."

Following the move, Unsworth announced that he started preparing legal action against Musk for defamation in the courts of Thailand, where Musk could get a jail sentence for his remarks. He also said at the time, that he wants to sue Musk in the courts of Great Britain and the US.