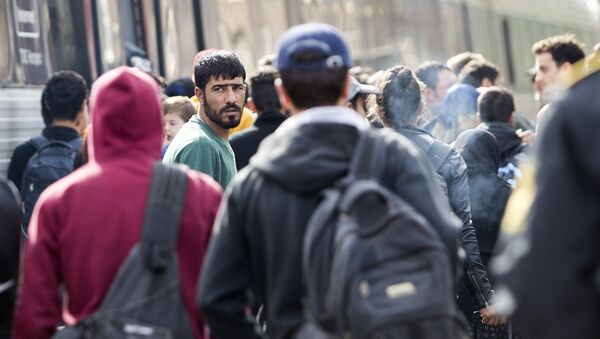 The latest polls suggest that the right-wing Stram Kurs party, which has gained publicity through Quran burnings and calls to deport Muslims, may well enter the Danish parliament.

The right-wing Stram Kurs ("Hard Line") party, which has run a rapid campaign to obtain the necessary number of signatures, is ready to make their debut in national elections, Danish Radio reported.

A recent Voxmeter survey indicates a 2.4 percent support for Stram Kurs, which means that the anti-immigration party, founded in 2017 by Rasmus Paludan, may well enter parliament in its very first run, Danish Radio reported. The threshold to enter the Danish parliament is 2 percent.

"This is of course pleasing. I don't take anything for granted, but we may have even greater support. There are many right-wingers who do not want to say they're voting Stram Kurs," Paludan said.

In a recent reader poll by Extra Bladet daily newspaper, Stram Kurs gathered as much as 24 percent, but this sensational result was later attributed to a troll invasion from the 4chan forum, Danish Radio reported.

Should the right-wing Stram Kurs party manage to get any seats, as the current polls indicate, it remains an open question whether other parties are prepared to work with the newcomers, whose narrative is in stark contrast with mainstream Danish politicians. Among other things, Stram Kurs advocates banning Islam in Denmark, expelling refugees and cancelling Danish citizenship for non-Western immigrants.

So far, only the right-wing Danish People's Party (DF), currently Denmark's second-largest, has voiced its readiness to co-operate.

"If they come up with any good ideas, then we would be happy to discuss co-operation with them. We go for the ball and not the man," DF group chair Peter Skaarup told the newspaper Jyllands-Posten.

By contrast, current Prime Minister Lars Løkke Rasmussen, who heads the liberal-conservative Venstre party that is largely dependent on DF to form a parliamentary majority, firmly ruled out cooperating with Stram Kurs.

"I'm not going to build a government on political dialogue or concessions to that party. It just won't happen," Løkke Rasmussen said.

Venstre's sidekicks, the Conservatives and the Liberal Alliance, have both expressed similar sentiments.

Until as late as last month, ethno-nationalist Stram Kurs' chances of gathering the necessary voter declarations looked slim, but the party receive extensive national and international coverage when one of Paludan's "free speech" demonstrations, in which he attempted to burn the Quran, sparked off a riot in Copenhagen's immigrant-heavy district of Nørrebro on 14 April.

In a recent political debate, Paludan warned of Danes becoming a minority in their own country, should the current trends persist.

The leader of the Danish Hard Line party just called out the #GreatReplacement.

Look at the faces of the 'mainstream' politicians. Priceless. pic.twitter.com/SSMuVVrPVk

​Meanwhile, the Danish right wing may end up seriously bolstered after the general election, which must take place by 17 June at the latest. DF and Stram Kurs may be joined by the New Right, headed by Pernille Vermund. The New Right, which have polled up to 6.9 percent, are also anti-EU, anti-immigration and anti-Islam.