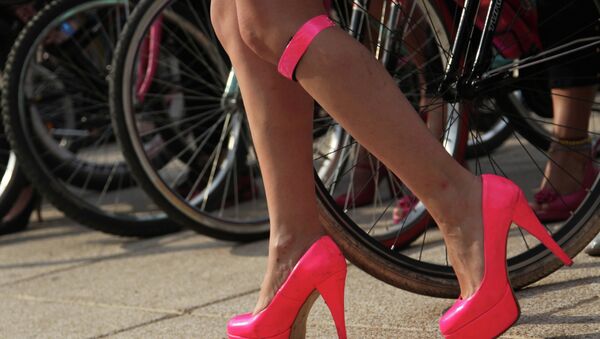 © AP Photo / Marco Ugarte
Subscribe
A international poll conducted in 23 major countries found that Danish women would rather be wolf-whistled at than called feminists, making the Scandinavian country nominally the world's "least feminist".

While Scandinavia is commonly thought of as the leading region in the world in terms of gender equality, Denmark surprisingly ranked among the least feminist countries in the recent poll by the YouGov-Cambridge Globalism Project, conducted in collaboration with The Guardian.

The global survey, which polled over 25,000 people in 23 major countries on gender, equal rights and the anti-harassment #MeToo movement, found out that only one in six Danes call themselves a feminist.

Fittingly, even Denmark's Equality Minister Karen Ellemann declared that she didn't consider herself one when she took up the post three years ago. Only a quarter of Danish women consider themselves feminists, which marks a stark contrast to neighbouring Sweden, where 46% do. Surprisingly, when it comes to feminist self-identification, Danes polled even lower than Italy and Spain, which are thought to lag behind Denmark in terms of gender equality.

By contrast, a third said that wolf-whistling at women in the street was acceptable. Fully one third of Danish women argued this habit was acceptable, the highest proportion in any country other than Nigeria.

"I don't mind it so long as it's done in a nice way" 37-year-old accountant Helene Frost Hansen told The Guardian. "I see it as a compliment, actually". According to her, many Danish women would like Danish men to be more like their counterparts in southern Europe.

According to Rikke Andreassen, a professor of communication studies at Roskilde University, Danes tolerate low-level sexual harassment due to the belief that it should be excused if "meant well".

This attitude may explain the differences in how the public debate around the #MeToo movement has played among Danes and their Scandinavian peers across the Öresund Strait. While #MeToo totally engulfed Sweden, triggering countless petitions signed by thousands of representatives of various trades, hours of media debate and hundreds of opinion pieces, as well as numerous outings of alleged sexual predators, in Denmark it received only a fraction of the attention.

Conversely, only 4 percent of Danish men and 8 percent of women in Denmark said they had a "very favourable" impression of #MeToo, compared to 16 percent and 34 percent in Sweden, and the average of 19 percent and 24 percent across the survey.

Even Danish London-based comedian Sofie Hagen, who is trying to establish her own brand of body-positive feminist humour, explained that she couldn't enjoy the same success in her home country.

"Feminism is a dirty word in Denmark. <…> and political correctness is often seen as a bad thing," the self-proclaimed "fat activist" famously told the Information daily newspaper.

000000
Popular comments
Speaking of MeToo syndrome isn't it funny that liberal elitist Biden who has hundreds of video clips of his abuse gets off the MeToo meat hook simply for being liberal while the likes of Harvey with only gossip evidence against him gets the MeToo meat grinder treatment
Tazo
10 May 2019, 12:44 GMT2
000000
Never really understood this feminist thing - if a women goes out of her way to look good, then it just seems rude not to pay her a compliment. I worked in Thailand and the girls loved being complimented (these were degree educated engineers) seems a shame that PC is getting in the way of being nice to someone
brwnxpng
10 May 2019, 12:34 GMT1
000000
Newsfeed
0
New firstOld first
loader
LIVE
Заголовок открываемого материала
Access to the chat has been blocked for violating the rules . You will be able to participate again through:∞. If you do not agree with the blocking, please use the feedback form
The discussion is closed. You can participate in the discussion within 24 hours after the publication of the article.
To participate in the discussion
log in or register
loader
Chats
Заголовок открываемого материала
Worldwide
InternationalEnglishEnglishMundoEspañolSpanish
Europe
DeutschlandDeutschGermanFranceFrançaisFrenchΕλλάδαΕλληνικάGreekItaliaItalianoItalianČeská republikaČeštinaCzechPolskaPolskiPolishСрбиjаСрпскиSerbianLatvijaLatviešuLatvianLietuvaLietuviųLithuanianMoldovaMoldoveneascăMoldavianБеларусьБеларускiBelarusian
Transcaucasia
ԱրմենիաՀայերենArmenianАҧсныАҧсышәалаAbkhazХуссар ИрыстонИронауОssetianსაქართველოქართულიGeorgianAzərbaycanАzərbaycancaAzerbaijani
Middle East
Sputnik عربيArabicArabicTürkiyeTürkçeTurkishSputnik ایرانPersianPersianSputnik افغانستانDariDari
Central Asia
ҚазақстанҚазақ тіліKazakhКыргызстанКыргызчаKyrgyzOʻzbekistonЎзбекчаUzbekТоҷикистонТоҷикӣTajik
East & Southeast Asia
Việt NamTiếng ViệtVietnamese日本日本語Japanese俄罗斯卫星通讯社中文（简体）Chinese (simplified)俄罗斯卫星通讯社中文（繁体）Chinese (traditional)
South America
BrasilPortuguêsPortuguese
NewsfeedBreaking
14:23 GMTUS Ambassador in Russia Offers Condolences Over Perm University Shooting
14:18 GMT'Not a Defence Pact': Australia Reassures ASEAN as Malaysia, Indonesia See Red Over AUKUS
14:09 GMTPriti Patel Warned 'Limited Evidence' Backs Efficacy of New Clampdown on Migrant Channel Crossings
13:43 GMTBritain's Food Supply Chain 'Highly Resilient', PM's Spokesman Says Amid Soaring Gas Prices
13:42 GMTOver Half of French Saw Purchase Power Shrink Under Macron, Poll Shows
13:38 GMTRussian Industry&Trade Ministry, Russian Export Centre Await Requests From Exporters to Support R&D
13:22 GMTPoland Claims Russia And Belarus Behind 'Well-Directed Action' to Send Migrants Over EU Border
13:20 GMTTikTok's Chinese Version Limits Screen Time for Kids to 40 Minutes a Day
13:19 GMTJust Another Day in Space: Massive Asteroid to Approach Earth
13:18 GMTPalestinian Sets up West Bank’s 1st E-Waste Processing Plant, But It Won’t Solve Pollution Problems
13:16 GMTFive People Killed as Almaty Resident Opens Fire at Bailiffs, Police Officers
13:10 GMTManchester United Midfielder Paul Pogba Told to Shut His 'F***ing Mouth' by West Ham Fans - Video
12:44 GMTWhat Does the Future Hold for Prince Andrew?
12:36 GMTElysee Palace: US Never Mentioned AUKUS and Never Answered France's Questions
12:35 GMTCanada’s National Election Day Begins as Polls Open in Newfoundland, Labrador
12:30 GMTIranian Commander Says US’ ‘Humiliating Escape’ From Afghanistan Lesson for Dependent Allies
12:30 GMTIndia's Top Sikh Organisation Suspects Attack on Washington Worship House is Racial
12:21 GMT‘Disappointed’ Senate Dems Blocked From Attaching Immigration Reform to Biden's Massive Budget Bill
12:16 GMTIt's a Girl: Compromised Royal, Prince Andrew, Welcomes New Grandchild
11:52 GMTElection Commission: United Russia Ahead With 49.82% in Parliamentary Vote as 99% of Ballots Counted