WATCH: US Fires Second Minuteman III ICBM in a Month, Between DPRK Tests 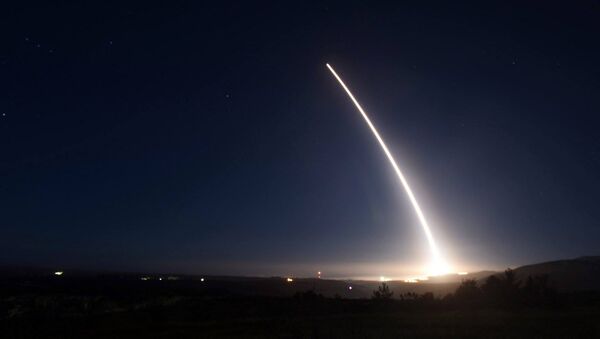 © AP Photo / U.S. Air Force
Subscribe
The US has test fired its second Minuteman III intercontinental ballistic missile in as many weeks. The Thursday test was matched by two North Korean tests of short-range missiles only minutes before and after.

Just after midnight on Thursday, US Global Strike Command fired a Minuteman III ICBM from Vandenberg Air Force Base in California toward Kwajalein Atoll, 4,200 miles away in the Pacific Ocean, to verify the nuclear-capable rocket's accuracy and to put on a robust show of force. The rocket had no nuclear warhead aboard.

​Just 11 minutes before the US test, the Democratic People's Republic of Korea (DPRK) fired off a short-range missile in its own weapons test; a second missile test followed, coming nine minutes after the US test. This was also Pyongyang's second missile test this month, having fired off a number of rockets and also possibly one short-range ballistic missile, on May 1.

Like Thursday's test, the North Korean test earlier this month paralleled the US ICBM launch.

The US Air Force schedules tests of its missile systems years in advance, typically firing off a couple every year, selected at random from the US missile stock, to verify the projectiles' targeting and flight systems are still up to par.

The Minuteman III has formed the backbone of the US nuclear weapons arsenal since 1970. It was the first US missile fitted with Multiple Independent Reentry Vehicles (MIRVs), enabling it to carry up to three different warheads that can strike independent targets. The US presently has roughly 440 Minuteman IIIs in its arsenal, according to the Center for Strategic and International Studies think tank.

The tests also coincided with a visit to the South Korean capital of Seoul by Stephen Biegun, the US special envoy to North Korea, and a trilateral defense conference between the US, South Korea and Japan.

The tests have only further fueled anxiety that the failed February 2019 summit in Hanoi, Vietnam, between the US and DPRK leaders would lead to the breakdown of the peace process begun last summer in Singapore. At that June 2018 summit, US President Donald Trump and North Korean leader Kim Jong Un pledged to work toward denuclearization and peace on the Korean Peninsula.

Before last week's missile test, the DPRK had not fired a ballistic missile since November 2017. Its nuclear weapons program was also placed on hold last year to help facilitate peace talks, but no revival of that program has yet been observed, although some observers have speculated that satellite photos showing increasing activity at the country's research centers might signal such a development.

000000
Popular comments
With NK or not the USA continue stilling fear on the testing of those missiles while and the same time preventing other countries doing the same. Trump is dancing the war music before unleash all his power in China and Russia. Trump still believe that a WW3 will be in Europe only.