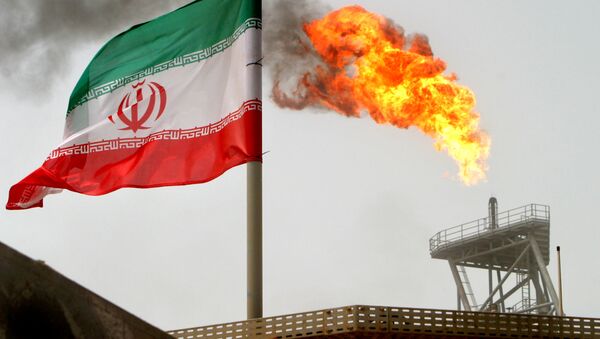 © AP Photo / Raheb Homavandi
Subscribe
WASHINGTON (Sputnik) - Iran is halting some Joint Comprehensive Plan of Action (JCPOA) activities hoping to push the Europeans to defy US sanctions and expand their oil trade with Tehran, but the major European states are unlikely to do so, retired CIA officer Phil Giraldi told Sputnik.

"I think the Iranians are putting pressure on the Europeans to do something to salvage the JCPOA, which is in their interest to preserve," Giraldi, a former CIA case officer who had served in the Middle East, said on Wednesday. "I do not think they will be successful."

He explained that the Europeans were not united and were nervous about Washington's possible reaction vis-a-vis NATO, support for which would be Trump's quid pro quo, Giraldi, who is also a member of Veteran Intelligence Professionals for Sanity.

"I don't think the sanctions per se are the issue… [The Iranians] would want the Europeans to push ahead aggressively with their proposed mechanism to work around the Swift dollar denominated system for financial transactions, enabling oil exports/sales to proceed," Giraldi said.

Speaking about possibility of the US retaliatory action, Girladi warned that US President Donald Trump would not hesitate to take it if the United States’ main allies in Europe failed to support him wholeheartedly on imposing the intensified oil sanctions against Tehran. He noted that "if the Europeans do not support the White House on Iran the US will cut back on its support of NATO."

Trump was also prepared to use direct military action against Iran if the Iranians used the US withdrawal from the JCPOA to restart nuclear-weapons grade material, Giraldi added.

"Yes, the United States will bomb Iranian nuclear facilities if they start producing weapons grade uranium," according to Giraldi.

The United States would also be prepared to intervene to paralyze the United Nations to prevent it generating any diplomatic momentum to prevent any such attacks, Giraldi predicted.

"No, the United Nations will do nothing as the United State veto will be used to stop any action," he said.

France, Germany and the UK Remain 'Fully Committed' to Maintaining the JCPOA
Phil Giraldi's statements come after Iran informed the ambassadors of the United Kingdom, France, Germany, China and Russia on Wednesday of its decision to suspend some of its obligations under the JCPOA, also known as the Iran nuclear agreement. Iranian President Hassan Rouhani said he gave European countries 60 days to hold negotiations with Iran.

Iranian authorities later said that Wednesday’s measures were taken in response to violations of the JCPOA by the United States, including the revival of sanctions and by the inability of the remaining signatories to the agreement — Germany, France, the United Kingdom, China, Russia and the European Union — to resolve the situation.

The views expressed in this article are solely those of Phil Giraldi and do not necessarily reflect the official position of Sputnik.

000000
Popular comments
Gutless EU joins in on all the atrocities we should stand against.
hadfieldtim@yahoo.com
9 May 2019, 17:09 GMT3
000000
I would think world leaders would be growing tired of obeying the US terrorist, kick the US out of NATO and out of EU, Russia is your friend you don't need the US ruling your country putting you in unnecessary danger to appease their bad behavior.
Shadowlady8
9 May 2019, 18:20 GMT3
000000
Newsfeed
0
New firstOld first
loader
LIVE
Заголовок открываемого материала
Access to the chat has been blocked for violating the rules . You will be able to participate again through:∞. If you do not agree with the blocking, please use the feedback form
The discussion is closed. You can participate in the discussion within 24 hours after the publication of the article.
To participate in the discussion
log in or register
loader
Chats
Заголовок открываемого материала
Worldwide
InternationalEnglishEnglishMundoEspañolSpanish
Europe
DeutschlandDeutschGermanFranceFrançaisFrenchΕλλάδαΕλληνικάGreekItaliaItalianoItalianČeská republikaČeštinaCzechPolskaPolskiPolishСрбиjаСрпскиSerbianLatvijaLatviešuLatvianLietuvaLietuviųLithuanianMoldovaMoldoveneascăMoldavianБеларусьБеларускiBelarusian
Transcaucasia
ԱրմենիաՀայերենArmenianАҧсныАҧсышәалаAbkhazХуссар ИрыстонИронауОssetianსაქართველოქართულიGeorgianAzərbaycanАzərbaycancaAzerbaijani
Middle East
Sputnik عربيArabicArabicTürkiyeTürkçeTurkishSputnik ایرانPersianPersianSputnik افغانستانDariDari
Central Asia
ҚазақстанҚазақ тіліKazakhКыргызстанКыргызчаKyrgyzOʻzbekistonЎзбекчаUzbekТоҷикистонТоҷикӣTajik
East & Southeast Asia
Việt NamTiếng ViệtVietnamese日本日本語Japanese俄罗斯卫星通讯社中文（简体）Chinese (simplified)俄罗斯卫星通讯社中文（繁体）Chinese (traditional)
South America
BrasilPortuguêsPortuguese
NewsfeedBreaking
22:38 GMTAlternative for Germany to Continue Supporting Nord Stream 2 After Election - Co-Chairman
22:01 GMTMilitants in Aleppo Tried to Force Way From Turkish-Controlled Area - Russian Military
21:48 GMTGermans See No Use to Vote for CDU Without Merkel at Helm - Afd Politician
21:19 GMTGerman Conservatives Suffer Catastrophic Defeat in General Election – Senior Official
21:00 GMTGermany's FDP Leader Hints at Coalition Talks With Greens
20:45 GMTMacron Files Complaint Against Paparazzi for Invasion of Privacy - Reports
20:16 GMTTwitter Removes Blue Verified Badge From Accounts of Several Afghan Ministries - Reports
20:00 GMTLaschet, Scholz Want Coalition Talks to End by Christmas
19:41 GMTCIA Was Ready to Start Firefight in London to Prevent Russia From Busting Out Assange, Media Claims
19:20 GMTSuicide Pact? Top Labour Remainer Says Party Should Campaign to Rejoin EU
18:58 GMTVideo: Miss France 2019 Confronted by 'Teenage Gang' That Threw Stones at Her in Paris
18:47 GMTFree For All! Enraged Moped Drivers Fight in London Amid Lack of Fuel - Video
18:39 GMTPSG's Kylian Mbappe Caught on Camera 'Lamenting Neymar Would Not Give Him Passes'
18:35 GMTPowerful 5.7-Magnitude Earthquake Hits Philippines' Largest Island Luzon
18:00 GMTInfrastructure Plan: Pelosi Says She 'Never' Brings a Bill to Floor 'That Doesn't Have the Votes'
17:43 GMTUsyk vs. Fury? Gypsy King's Twitter Like Leaves Fans Buzzing About Possible Heavyweight Clash
16:50 GMTLabour Leader Demands Visas For 100K Foreign Lorry Drivers Amid Global Shortage
16:33 GMTLabour Staff Cuts That Prompted Strike Ballot Due to £2m-a-Year Legal Costs
16:23 GMTDHS Chief Reveals Up to 12,000 Haitians Who Crossed Southern Border Were Released Into US
16:21 GMTTurkey Wants US Military to Leave Syria, Iraq After Afghanistan Withdrawal, Erdogan Says