First Nuclear-Capable B-52 Bombers Arrive In Middle East From US (PHOTO, VIDEO) 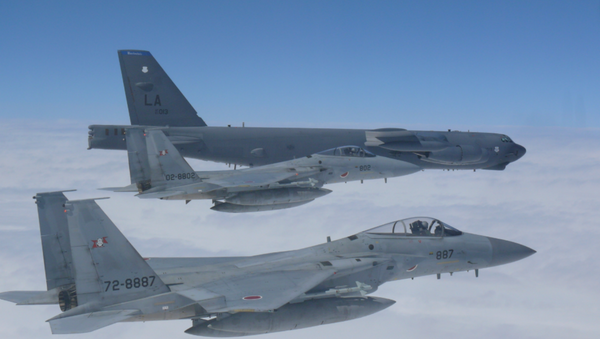 On Tuesday the US military announced that B-52 Stratofortress strategic bombers will be deployed to the Middle East in response to what US Acting Secretary of Defence Patrick Shanahan dubbed "indications of a credible threat by Iranian regime forces."

The US Central Command released photos of B-52H bombers assigned to 20th Expeditionary Bomb Squadron that arrived in CENTCOM area of responsibility (AOR).

According to the description, the Boeing Stratofortresses "can perform strategic attack, close-air support, air interdiction, offensive counter-air and maritime operations to support stability in the region."

Earlier the Pentagon released a video showing four nuclear-capable B-52 bombers taking off for the Middle East.

VIDEO: The Pentagon releasing new footage of B-52 nuclear-capable bombers as the takeoff for the Middle East. They’re heading to Al Udeid Air Base in Qatar as part of Trump Administration’s response to a “credible threat” from Iran. #iran #nucleardeal #bombers #trump #qatar #b52 pic.twitter.com/ymSh0wjE74

​On Sunday National Security Adviser John Bolton announced the deployment of the USS Abraham Lincoln and a bomber task force to the US Central Command region, intended to send a message to Tehran.

Iran dubbed the announcement an act of "psychological warfare."