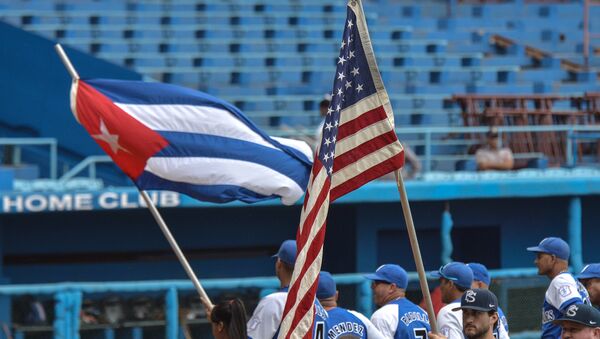 In April, the US announced that it would enable lawsuits against foreign businesses that use property confiscated in Cuba after Fidel Castro’s revolution as Washington has stepped up pressure against the island nation, which supports Venezuela’s legitimate President Nicolas Maduro amid an ongoing political crisis.

Spanish Foreign Minister Josep Borrell has lashed out at US President Donald Trump, whose administration has decided to enforce a legal provision allowing lawsuits over nationalised Cuban property in US courts. In an interview with Spanish public broadcaster TVE, the official warned that this could open a legal battle and threatened that Spain “will go to the WTO” (World Trade Organisation).

"This is further proof of a lack of cooperation on the part of the US administration and the adoption of extra-territorial measures which, according to us, are an abuse of power which we oppose", Borrell stated.

He also took an aim at Trump's administration over Washington’s repeated warnings that "all options" are on the table in order to oust Nicolas Maduro, including military intervention. He pointed to the contact group of EU and some Latin American governments that are seeking to talk the Venezuelan president into holding new elections, highlighting the differences between the group’s stance and that of the US.

"The contact group which we are part of is not on the same wavelength as the US administration, which is like a cowboy who says ‘look at me, I will draw my gun’. We don't want someone who draws their weapon. On the contrary, we call for a peaceful, negotiated and democratic solution”, he added.

Spain, like many other European countries, has sided with the US and recognised Juan Guaido as Venezuela’s interim president. At the same time, Madrid is Cuba’s leading investor in the EU and could be hit by Washington’s latest move, along with other member states of the bloc.

The EU, which is considered the island’s biggest investor, has already condemned the proposed move on lawsuits and vowed to use all appropriate means, including suing the United States by turning to the World Trade Organisation (WTO) to counteract possible economically detrimental effects to the bloc.

In May, the 1996 US Helms-Burton Act, which has been partially suspended since its enactment, came into full effect. The act permits Cuban Americans and other US citizens to file lawsuits in American courts against businesses, including many European ones, operating on Cuban government-owned properties that were appropriated in the 1959 revolution.