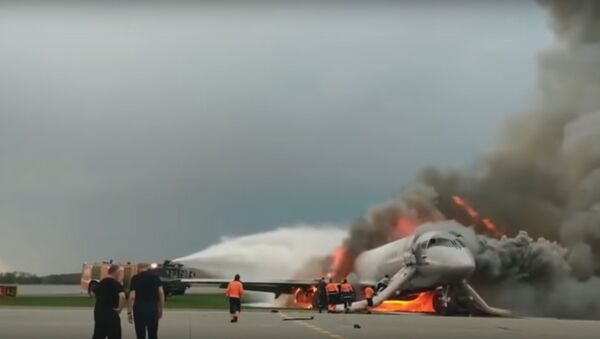 On Sunday evening, a Murmansk-bound Sukhoi Superjet-100 was forced to make an emergency landing at Moscow's Sheremetyevo Airport due to a massive fire on board, which ultimately destroyed the aircraft on the ground and resulted in the deaths of 41 people.

New details of Sunday's Russian jet tragedy have been captured in a chilling video showing the co-pilot climbing out of a smoke-engulfed cockpit only to frantically clamber up the emergency slide in a bid to save people trapped in the aircraft.

As spotted by the Daily Mail, the co-pilot, 36-year old Maxim Kuznetsov, is seen exiting the cockpit with the help of a rescue team moments after the jet made an emergency landing and caught fire.

The man then rushed up the slippery emergency slide but kept falling back until he eventually made it to the burning jet aided by the rescue workers.

One report suggests that Kuznetsov attempted to save the captain Denis Evdokimov, but this information has not been confirmed.

Evdokimov himself stated that the second pilot was the first to leave the cockpit but did not elaborate how he had exited the plane.

According to Moscow newspaper Moskovsky Komsomolets, Kuznetsov rescued a passenger as well as vital flight documents.

The Russian Investigative Committee confirmed on Sunday that 41 people, including two children, died in the fire that broke out on board an Aeroflot-operated Sukhoi Superjet-100 aircraft after it made an emergency landing at Sheremetyevo International Airport in Moscow.

The blaze ultimately destroyed half of the Murmansk-bound aircraft, which was carrying 78 people and 6 crew on board.